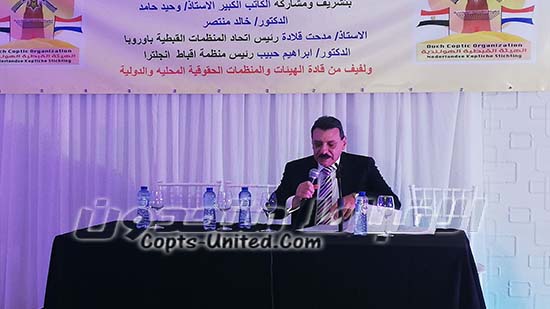 Engineer Ezzat Boulos, editor-in-chief of Copts United, said that the Egyptian constitution stipulated that Egypt is a democratic country based on citizenship, and this citizenship developed since the era of Muhammad Ali on the abolition of the unified uniform imposed on the Copts and then abolished the Jiziah by the entry of Christians to the army until the revolution of 1919, and the revolution of 1952, till the revolution of June 30. He added at the conference held in Amsterdam under the auspices of the Coptic Dutch organization President Abdul Fattah al-Sisi has supported the citizenship by visiting the Church on Christian feasts and built churches in new cities, but we need a civil state in order to apply the full citizenship.

C-SAT broadcasts the Conference of the Coptic Dutch Association

The C-sat channel broadcast the conference of the Coptic Dutch Association in the Netherlands that discusses mechanisms to support citizenship and how to confront terrorism and extremism. The media and announcer George Rashad presented the conference, which was held yesterday in the presence of writer and author Wahid Hamid and Egyptian thinker Khaled Montaser and members of European Union of Coptic Organizations for Human Rights. 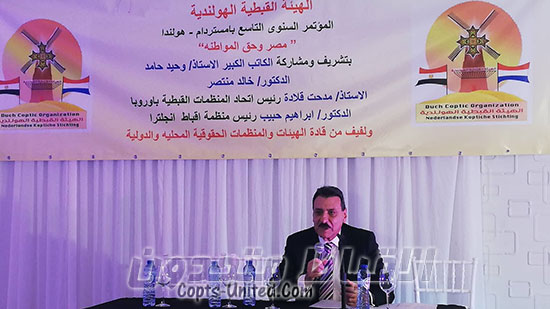 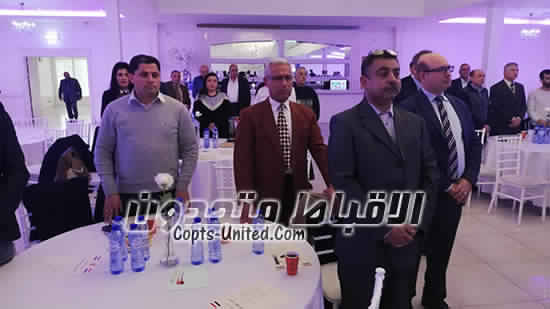 Conference of the Coptic Dutch Association discusses challenges of citizenship

Conference of the Coptic Dutch Association has started this year by discussing the challenges of citizenship. Sameh Suryal, member of the Coptic Dutch Association, said that the rights of citizenship in Egypt needs to develop mechanisms based on equality in rights and duties. He also denounced the customary reconciliation sessions that violate the law and assure safe exit for the assailants in sectarian attacks.

Consul of Egypt in New York and a number of bishops of the Coptic Orthodox Church participated in the seventh anniversary of the departure of Pope Shenouda III, under the auspices of Bishop David of New York and the Association of Pope Shenouda Charity. Nabil Megalaa, head of the association, said that Pope Shenouda has always been an inspiration for all Egyptians and his heritage, books, sermons and acts will continue to teach the generations to come. 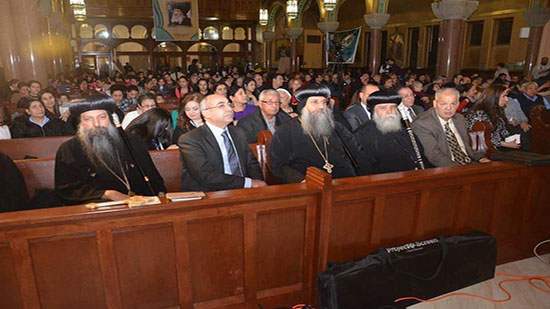 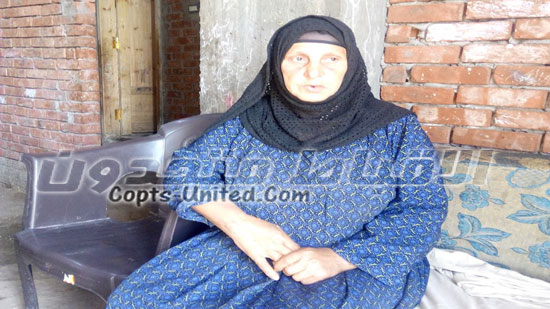 HG Patriarch Ibrahim Isaac of the Coptic Catholic Church, arrived in Melbourne to starts his pastoral journey. An official reception party was held by the Consul of Egypt, Mohamed Naguib Fakhri, in the presence of consulate counselor Reem Zahran and members of the Egyptian community in Australia. 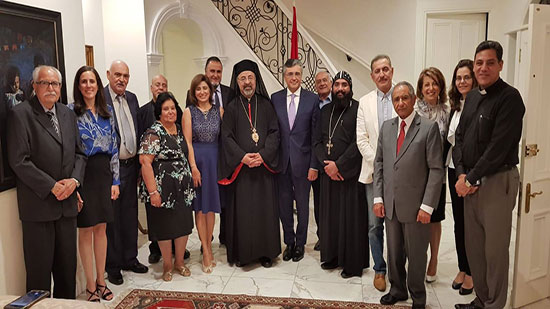 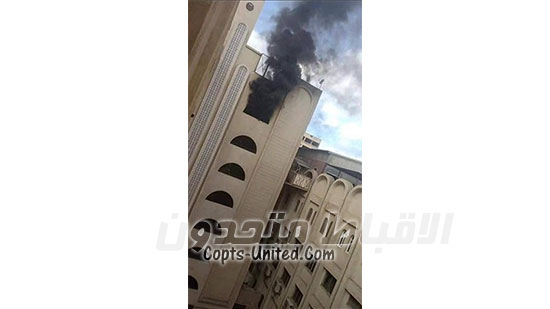 Limited fire at the Church of St. Demiana in Giza

A limited fire erupted on the roof of the Church of St. Damianh at King Faisal Street in Giza. Investigations showed that the fire erupted due to a short circuit or electrical fire. A number of equipment and electric devices were destroyed in the fire, but no human losses were reported.

During his pastoral visit to Port Said, Pope Tawadros II opened the exhibition of Pope Shenouda III at the Church of the Blessed Virgin Mary and the Archangel Michael in Port Said. The items at the exhibition was dedicated by His Holiness Pope Tawadros to Bishop Tadros of Port Said and includes pens, crowns, clothes and notebooks of the late Pope. 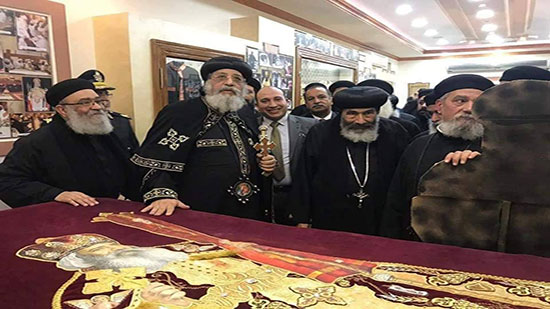 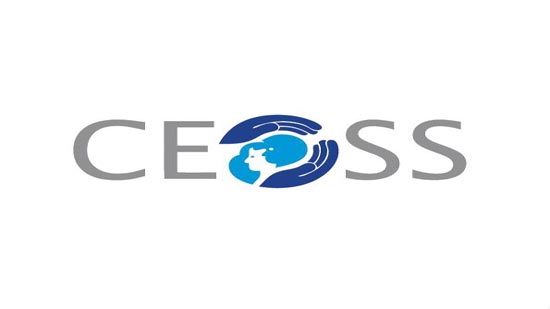 The Evangelical Body celebrates the winners of the "Samuel Habib" Awards

The Evangelical Body celebrates the winners of the "Samuel Habib" Awards in 2019 for excellence in social work for those who provide distinguished services to the community, and another Christian religious leader that provides services to all citizens of the homeland without discrimination. Dr. Rev. Andria Zaki, head of the Evangelical community in Egypt and head of the Coptic Evangelical Organization for Social Services, said: The late Dr. Rev. Samuel Habib left us the message for which he dedicated his life and which continues to affect us and many of our partners in Egyptian society. Reverend Samuel Habib (1928-1997) was the founder of the Coptic Evangelical Organization for Social Services, Rev. Habib was also a leader in the Evangelical (Presbyterian) Church of Egypt and president of the Protestant Churches of Egypt. Rev. Habib used his role to strengthen cross-cultural and inter-faith understanding, peacebuilding, and dialogue in the region. An author and a professor, Rev. Habib was an influential leader in both the local and international scene.

Police in Samalout, Minya, are taking extra security measures to secure the village of Ali Basha where sectarian clashes are expected after a Muslim man and his converted wife into Islam decided to return to the village and dwell in the house next to her family. 7 Coptic families in the village left their homes fearing potential attacks of the extremists, after her conversion was celebrated by the extremists who took pride in her conversion and insulted her family and their faith. 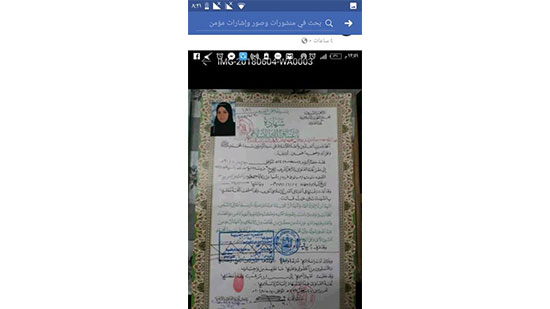 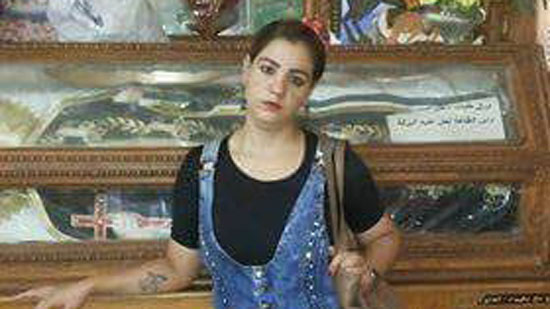 7 Coptic families in the village of Ali Pasha in Samalut, Minya, left their homes fearing potential attacks of the extremists. A Coptic girl had converted into Islam, but her Muslim husband decided to bring her back to the village to live in the house next to her Christian family, which was celebrated by the extremists who took pride in her conversion and insulted her family and their faith.

Bishop Raphael meets with youth of the diocese in Haret Zuweila

HG Bishop Raphael of central Cairo Church held a meeting with youth of the diocese at the Church of the Virgin Mary in Haret Zuweila. The meeting was held under the title the tribulation and was attended by clergy and a large number of youth. 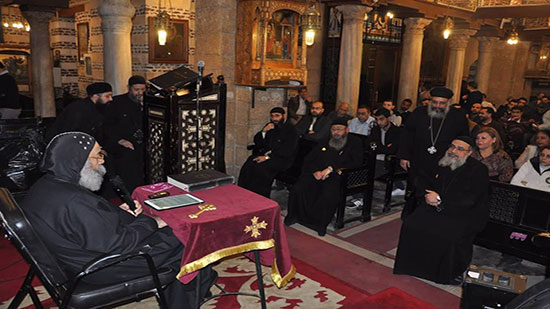 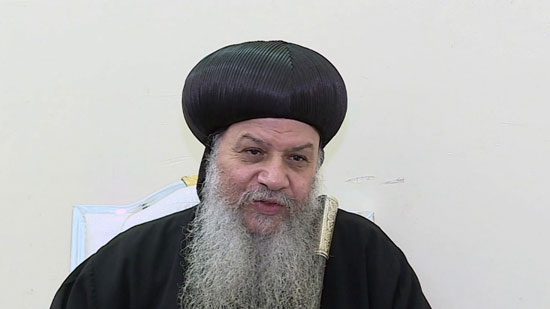 Commenting on the verdict to execute the monks accused of killing bishop Epiphanius, head of St. Makar monastery in Wadil Natroun. Bishop Aghathon described the ruling of being a catastrophe and today is a sad day. He also called to hold prayers for the monks and to appeal the ruling as soon as possible.

Esam Ebaid, secretary of the European Union for Egyptians, and member of the Christian Union in Holland, denounced the ruling to convict two monks of murdering Bishop Epiphanius at Abu Makar monastery in Wadil Natroun. Ebaid said that the court built its decision upon the police investigation which could have been affected by corruption and politics, and ignored the witnesses and fornication report that contradicts with the ruling. He added that such decision offense monasticism and open the door to interfere in the the affairs of the monasteries and the seizure of its lands. 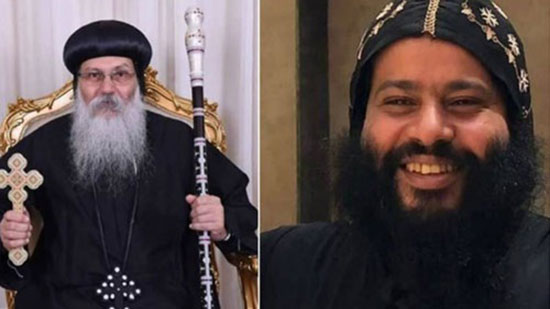 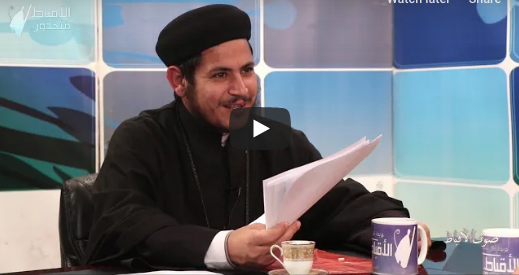 Father Yassa Marzouk, priest in Samalout diocese, denounced statement of the Egyptian Cabinet that claimed there is no closed churches in Minya. The priest assured that there are 8 Coptic Churches that were shut down in Samalout alone in addition to other Churches in Minya governorate.

Appeal of defendants in burning Kerdasa Church is rejected

Giza Criminal Court rejected the appeal of defendants in the case of burning Kafr Hakim Church in Kerdasa. The defendants were sentenced to life imprisonment after they were convicted in attaching the church, attempt murder and resisting authorities. 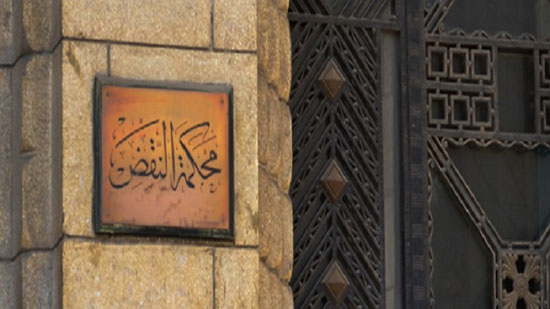 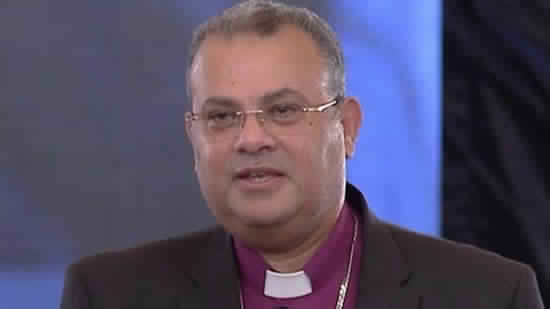 The Evangelical community in Egypt condemned the recent terrorist attack in Darb Ahmar, Cairo, that killed three policemen and injured four nearby citizens. Statement added that the community prays to God to offer his condolences to families of the victims and all the Egyptian people.

The Coptic Catholic Church receives Cardinal Sandri Leonardo, head of the Vatican s Eastern Churches Complex, at a major celebration on Feb. 25, with the most important events including the laying of the foundation stone of a new church in Assiut, Upper Egypt. In a special statement, Archbishop Cyril of Assiut, pointed out that the Vatican Cardinal is attending the 800th anniversary of the meeting of St. Francis with Sultan Malik al-Kamil, which is organized by the Franciscan Order in Egypt. 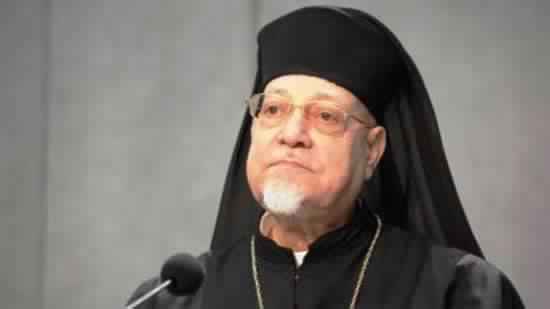 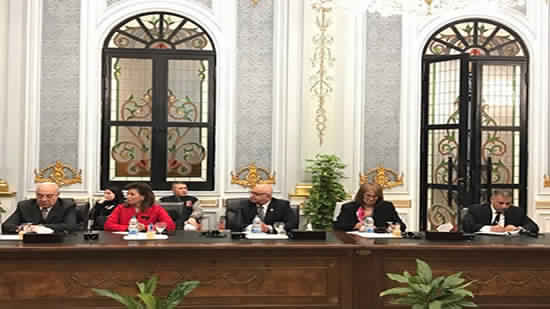 Delegation of the Egyptian-American dialogue visits the Parliament

Dr. André Zaki, head of the Evangelical community in Egypt, accompanied today delegation of the Egyptian-American dialogue with deputy of the Egyptian Parliament and a number of MPs at the Egyptian house of representatives. The American delegation includes the members of the Egyptian-American dialogue for the Dialogue of Cultures Forum in the Evangelical Organization, the Secretary General of the World Religions Parliament, a group of American church leaders and leaders of American civil society. Zaki said that The visit comes within the framework of the interrelationship between Egyptian and American leaders to reflect a true vision and a reality about the state of co-existence in Egyptian society, and an understanding of developments within American society.

The Departure of Bishop Theophils of the Red Sea

Bishop Theophils of the Red Sea died yesterday at the age of 77 after suffering from severe illness. He was born on April 6, 1942, and graduated from the Faculty of Engineering, Ain Shams University in 1967. He was ordained a monk at the Syrian monastery and was called Father Ignatius on 5 October 1976. 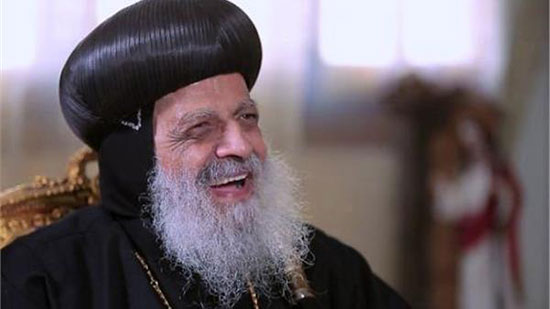 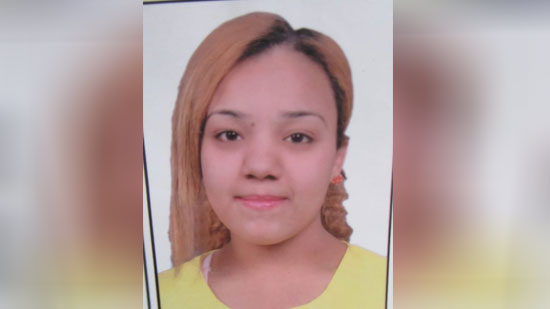 Disappeared Coptic girl returns to her home in Esna

Police in Esna returned today the disappeared Coptic girl Marnia Milad, 18 years old, to her family in Nawasir village, Esna, Luxor. The girl had disappeared last Thursday, and a young Muslim man was accused of being behind her disappearance. No further details were given about the incident.

Lest it be the beginning

The tragic accident that killed nearly fifty people in New Zealand is a humanitarian disaster by all means. Nobody can accept it, especially Christians, since such attack can only be driven by evil. The assailant being a Muslim who belong to ISIS in Turkey, or a racist atheist who declared his faith in the 73 pages published on his account on Facebook, can t belong to Christianity. If Muslims declare that ISIS do