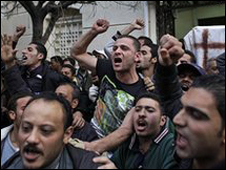 President Hosni Mubarak has urged Egypt's Muslims and Christians to stand united against terrorism after a bombing outside a church in Alexandria.

At least 21 people were killed and 70 hurt in the suspected suicide attack, which happened during a New Year's Eve service at the al-Qiddissin Church.
In a rare televised address, Mr Mubarak said it bore the hallmark of "foreign hands" seeking to destabilise Egypt.
Several hundred Christians later clashed nearby with Muslims and police.
'In this together'
About 1,000 worshippers were attending the Mass at the al-Qiddissin (Saints) Church in the Sidi Bechr district of the Mediterranean port city.
As the service drew to a close after midnight, a bomb went off in the street outside.
"The last thing I heard was a powerful explosion and then my ears went deaf," 17-year-old Marco Boutros told the Associated Press from his hospital bed. "All I could see were body parts scattered all over."
Another witness told the private On-TV channel that he had seen two men park a car outside the church and get out just before the blast.
Officials initially thought the cause was a car bomb, but the interior ministry later ruled it out, saying the attack was instead "carried out by a suicide bomber who died among the crowd".
A nearby mosque was also damaged by the explosion and the casualties included eight injured Muslims, the health ministry said.
Hours after the attack, President Mubarak went on state television to express his shock and vow to track down those behind it.
"This act of terrorism shook the country's conscience, shocked our feelings and hurt the hearts of Muslim and Coptic Egyptians," he said.
"The blood of their martyrs in Alexandria mixed to tell us all that all Egypt is the target and that blind terrorism does not differentiate between a Copt and a Muslim."
"This sinful act is part of a series of efforts to drive a wedge between Copts and Muslims, but Allah has aborted the plotters' plans and turned it against them. We are all in this together and will face up to terrorism and defeat it."
Mr Mubarak said the Egyptian people had been subject to "terrorism that knows neither homeland nor a religion".
"It was a terrorist operation which carries, within itself, the hallmark of foreign hands which want to turn Egypt into another scene of terrorism like elsewhere in the region and the wider world," he added.
Egypt's top Muslim leaders also expressed their condolences and unity.
The Islamist opposition movement, the Muslim Brotherhood, said no religion in the world could condone such a crime.
Sectarian tension
Despite the statements, hundreds of angry Copts clashed with police and local Muslims after the bombing, reportedly throwing stones and targeting the mosque near the church. Some cars were also set ablaze.
Dozens of police rushed to the scene and used tear gas to disperse the crowd.
The protests continued throughout Monday, with Copts marching through the area shouting, "With our soul and our blood we will redeem the Holy Cross" and "O Mubarak, the heart of the Copts is on fire".
The top Coptic cleric in Alexandria, Archbishop Arweis, said the security services wanted to blame a suicide bomber instead of a car bomb so they could write it off as something carried out by a lone attacker.
He also denounced the "lack of protection" in front of the church.
"There were only three soldiers and an officer in front of the church. Why did they have so little security at such a sensitive time when there's so many threats coming from al-Qaeda?" he told the Associated Press.
The government said it had stepped up security measures outside churches after the Islamic State of Iraq, a militant umbrella group that includes al-Qaeda in Iraq, threatened the Copts of Egypt at the end of October.
Christians in the Coptic Orthodox Church make up about 10% of Egypt's population, most of whom are Muslims.
In recent months, Copts have complained of discrimination, while some Muslims accuse churches of holding converts to Islam against their will, our correspondent reports.
The BBC's Arab affairs analyst Magdi Abdelhadi says the Alexandria bombing is likely to intensify the growing feeling among Christians in the Middle East that they are a community under attack.
The blast is deeply embarrassing for the Egyptian police who, despite having draconian powers, have proved repeatedly incapable of anticipating and thwarting such violence, he says.
Alexandria, Egypt's second-largest city with a population of about 4 million, has seen sectarian violence in the past.
In 2006, there were days of clashes between Copts and Muslims after a Copt was stabbed to death during a knife attack on three churches.
Tweet
Pope Shenouda Article