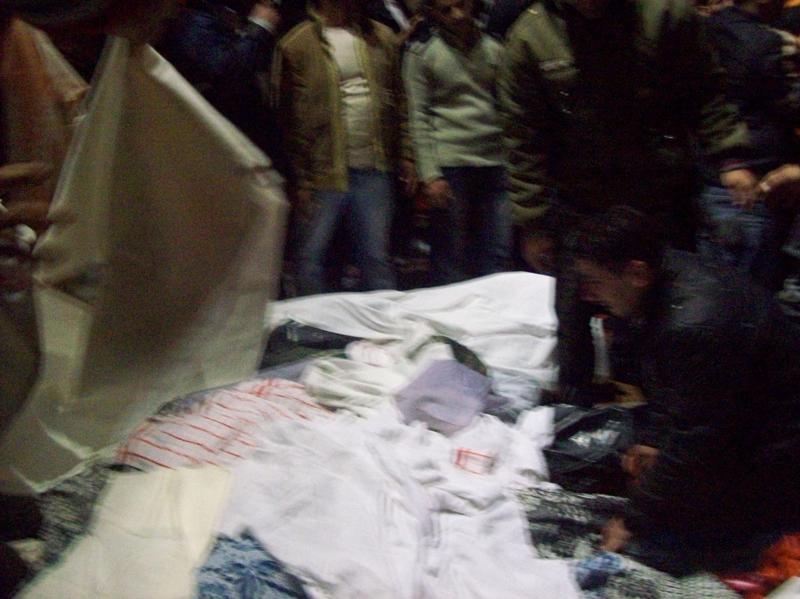 ALEXANDRIA, Egypt - A powerful bomb exploded in front of a crowded Coptic Christian church a half hour into the New Year early Saturday, hitting worshippers emerging from a holiday Mass in the Egyptian city of Alexandria and killing at least 21 people in an attack that raised suspicions of an al-Qaida role.

The attack came in the wake of repeated threats by al-Qaida militants in Iraq to attack Egypt's Christians. A direct al-Qaida hand in the bombing would be a dramatic development, as Egypt's government has long denied that the terror network has a significant presence in the country. Al-Qaida in Iraq has already been waging a campaign of violence against Christians in that country.
Police initially said the blast came from an explosives-packed car parked outside the Saints Church in the Mediterranean port city. But the Interior Ministry later said it was more likely from a suicide bomber who blew himself up among the crowd.
Both tactics are hallmarks of al-Qaida and have been rarely used in Egypt, where the government crushed an insurgency by Islamic militants in the 1990s. Though the government denies an al-Qaida presence, Egypt does have a rising movement of Islamic hard-liners who, while they do not advocate violence, adhere to an ideology similar in other ways to al-Qaida, and there have been fears they could be further radicalized amid growing sectarian tensions between Egypt's Muslim majority and Christian minority.
Nearly 1,000 Christians were attending the New Year's Mass at the Saints Church, said Father Mena Adel, a priest who attended. The service had just ended, and worshippers were leaving the building when the bomb went off about a half-hour after midnight, he said.
"The last thing I heard was a powerful explosion and then my ears went deaf," Marco Boutros, a 17-year-old survivor, said from his hospital bed. "All I could see were body parts scattered all over — legs and bits of flesh."
Bodies of many of the dead were collected from the street and kept inside the church overnight before they were taken away Saturday by ambulances for burial amid scenes of grief and anger.
Some Christians carried white sheets with the sign of the cross emblazoned on them with what appeared to be the blood of the victims.
"This attack targets Egypt's security as a whole," said Bishop Armia, a senior aide to Pope Shenouda III, the spiritual leader of Egypt's Orthodox Coptic Church. "God will protect us."
Senior Health Ministry official Osama Abdel-Moneim said the death toll stood at 21, with 79 wounded. It was not immediately known if all the victims were Christians. Saturday's attack is the deadliest involving Christians in Egypt since at least 20 people, mostly Christians, were killed in sectarian clashes in a southern Egyptian town in 1999.
Islamic militants have carried out three major bomb attacks — including some by suicide attacks — against tourist resorts in Egypt's Sinai peninsula between 2004 and 2006. The blasts in the resorts of Sharm el-Sheik, Dahab and Taba ended a respite from terrorism that had stretched back to 1997, when militants massacred nearly 60 tourists in a pharaonic temple in Luxor.
The Sinai attacks, which killed a total of 125 people, were blamed by the government on local extremists in an attempt to deflect concerns about al-Qaida, which could damage Egypt's vital tourist industry.
After the early Saturday blast, angry Christians clashed with police and Muslim residents, chanting, "With our blood and soul, we redeem the cross," witnesses said.
An AP photographer at the scene said the protesters broke into a nearby mosque and threw books out into the street. The protest sparked clashes with Muslims, as both sides began throwing stones and bottles at each other in the streets, until eventually police restored calm.
Police initially said the blast came from an explosives-packed vehicle parked about four meters (yards) from the church. But the Interior Ministry said later in a statement that there was no sign that the epicenter was a car. That, it said, "makes it likely that the explosives ... were carried on the person of a suicide attacker who died with the others."
There was no immediate claim of responsibility for the blast. Alexandria governor Adel Labib immediately blamed al-Qaida, pointing to recent threats by the terror group to attack Christians in Egypt.
He offered no evidence to support his claim, but a recent spate of attacks blamed on al-Qaida against Christians in Iraq have an unusual connection to Egypt.
Al-Qaida in Iraq says it is attacking Christians there in the name of two Egyptian Christian women who reportedly converted to Islam in order to get divorces, prohibited by the Orthodox Coptic Church.
The women have since been secluded by the church, prompting Islamic hard-liners to hold frequent protests in past months, accusing the Church of imprisoning the women and forcing them to renounce Islam.
Al-Qaida in Iraq says its attacks on Christians would continue until Egyptian Church officials release the two women. The Church denies holding the women against their will.
Christians, mainly Orthodox Copts, are believed to make up about 10 per cent of Egypt's mainly Muslim population of nearly 80 million people, and they have grown increasingly vocal in complaints about discrimination. There have been occasional attacks targeting Christians and churches — most notably, in January 2009, when seven Christians were killed in a drive-by shooting on a church in southern Egypt during celebrations for the Orthodox Coptic Christmas.
In November, hundreds of Christians rioted in the capital, Cairo, smashing cars and windows after police violently stopped the construction of a church. The rare outbreak of Christian unrest in the capital left one person dead.
Tweet
Pope Shenouda Article