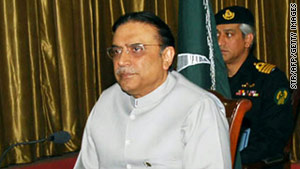 Islamabad (CNN) -- The second-largest party in Pakistan's ruling coalition quit the government Sunday over fuel price increases and other complaints, leaving President Asif Ali Zardari at the head of a minority government.

Sunday's announcement by the Muttahida Qaumi Movement that its 25 members would join the opposition comes after several previous threats to quit the government. But Prime Minister Yousuf Raza Gilani said the ruling Pakistan People's Party would be able to function without a majority in the National Assembly, which chooses the prime minister.
"Just because one party pulls out does not mean that the government will fall or come apart," Gilani told reporters.
The MQM is one of the largest and most liberal parties in Pakistan, with its stronghold in the southern city of Karachi.
Its exit follows December's withdrawal of the Jamiat Ulema-e-Islam-Fazal ur Rehman, a leading religious party.
Muhammad Anwar, a senior coordinator for the MQM, told CNN that the last straw for the party were the fuel price increases that took effect Saturday. Pakistan's government raised gasoline prices by 9.2% and increased kerosene by nearly 6%, blaming higher crude oil costs for the move.
Anwar also said the government had failed to crack down on "rampant" corruption and maintain law and order -- particularly in Karachi and the surrounding southern province of Sindh. Businessmen in Karachi "are virtually hostage" to extortion and kidnapping rings, he said.
And MQM leader Faisal Sabzwari said Sunday that the PPP-led government also has imposed unfair taxes on the poor and allowed an energy crisis to fester. The party pulled its two cabinet ministers in the federal government last week, a move MQM leaders said was a warning to the government.
The decision leaves the PPP-led government that came to power in 2008 with 147 seats in the 342-seat National Assembly, where members serve up to five-year terms. Anwar said the MQM doesn't want the government to fail, but "The government is failing itself by its own deeds."
Tweet
Pope Shenouda Article