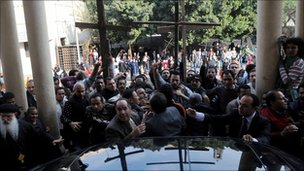 Egyptian Coptic Christians angered by a deadly bombing at a church in Alexandria have clashed with police for a second day.

Hundreds demonstrated in Alexandria, Egypt's second city, and Cairo, the capital, calling for better protection for Christians.
In Cairo, protests were reported at St Mark's Coptic cathedral and elsewhere.
Meanwhile, police were holding several people for questioning over Saturday's bombing, which left 21 dead.
There was no evidence that they were directly linked to the attack, officials said.
No-one has claimed responsibility for the bombing, which happened in the early hours of Saturday, though analysts say suspicion is likely to fall on Islamist radicals inspired by al-Qaeda.
Officials initially thought the attack was caused by a car bomb, but later said it was a suicide bomber standing in a crowd.
Authorities have reportedly stepped up security around all churches over the last two days.
Christians in the Coptic Orthodox Church make up about 10% of Egypt's population, most of whom are Muslims.
Tear gas
In Cairo on Sunday, demonstrators heckled government ministers who came to St Mark's, the seat of Orthodox Pope Shenouda, to offer condolences.
The car of one minister was pelted with stones.
Protesters clashed with riot police as they tried to break out, and demonstrations continued into the night, Reuters reported.
Another report said some Christians spilled onto nearby streets, attacking cars and protesting outside government buildings.
"Pope Shenouda, have a care. We are youth. We will protect you with our blood," the protesters were quoted as saying.
"Revolution, revolution in Egypt, in all churches of Egypt."
In Alexandria, protesters were dispersed by police firing tear gas.
The government said it had stepped up security measures outside churches after the Islamic State of Iraq, a militant umbrella group that includes al-Qaeda in Iraq, threatened the Copts of Egypt at the end of October.
In recent months, Copts have complained of discrimination. Some Muslims have accused churches of holding converts to Islam against their will.
The attack has been strongly condemned in Egypt and abroad.
President Hosni Mubarak urged Egypt's Muslims and Christians to stand united against terrorism, saying it bore the hallmark of "foreign hands" seeking to destabilise Egypt.
At the Vatican, Pope Benedict called it a "vile gesture", while US President Barack Obama has described it as a "heinous act".
On Saturday, thousands of people attended funerals for the victims at a monastery outside Alexandria.
Tweet
Pope Shenouda Article