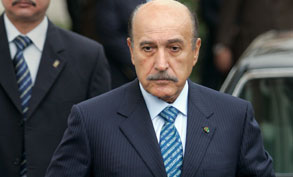 CAIRO: Egypt has started a dialogue with "political parties and national forces," state television said Thursday, but the main opposition coalition rejected any talks before President Hosni Mubarak goes.
Prime Minister Ahmed Shafiq said talks would involve protesters in Tahrir Square, focal point of sometimes deadly anti-Mubarak rallies which entered their tenth day on Thursday.
Vice President Omar Suleiman has started a dialogue with "political parties and national forces" against the backdrop of the ongoing protests, a news ticker on state television said.
"The dialogue will include representatives of protesters in Tahrir Square," according to Shafiq, the television reported.
The official MENA news agency said Suleiman and Shafiq "met a group of representatives and heads of parties who have accepted to join a national dialogue, this morning at the cabinet."
But the opposition National Association for Change rejected any talks before Mubarak steps down. It includes Nobel laureate Mohamed ElBaradei, members of the powerful Muslim Brotherhood, the Kefaya movement and other political parties.
"Our decision is clear: no negotiations with the government before Mubarak goes. After that, we're ready for dialogue with Suleiman," coalition member and spokesman Mohammed Abul Ghar told AFP.
ElBaradei — best known abroad as the former head of the UN's International Atomic Energy Agency, but little known on the Egyptian street — has become a central figure in the unprecedented uprising against Mubarak.
Suleiman, who emerged as Mubarak's first-ever vice president last week in an initial represent by the longtime head of state to the unrest, said Wednesday that the protests must end before talks with the opposition can start.
As many as 300 may have been killed, more than 3,000 injured and hundreds arrested since the uprising began on January 25, the UN High Commissioner for Human Rights, Navi Pillay, said on Tuesday.
The health ministry, cited on the television, said five people were killed and 836 injured since Wednesday in running clashes for control of Tahrir Square, the focal point of the anti-Mubarak movement.
Shafiq said Thursday that clashes between Mubarak's supporters and opponents would be the subject of an inquiry.
On Thursday, the tenth day of protests, thousands of protesters stood their ground against stone-throwing loyalists.
Tens of thousands of protesters have said they will go ahead with plans for a massive demonstration on Friday, their designated "departure day" for Mubarak.
Faced with the biggest protests of his presidency, Mubarak is holding onto power after appointing Suleiman as his first-ever vice president and announcing he will not seek re-election in September.
Tweet
Pope Shenouda Article