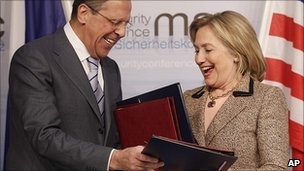 The New Start nuclear arms treaty limiting the number of atomic warheads the US and Russia are allowed to possess, has come into effect.

Russian Foreign Minister Sergei Lavrov and US Secretary of State Hillary Clinton exchanged ratification documents at a conference in Munich.
The treaty replaces the 1991 Start treaty which expired in December 2009.
It was approved by the US Senate in December and by the Russian parliament last month.
The papers exchanged in Munich had been signed by US President Barack Obama and Russian President Dmitry Medvedev following an agreement made last April.
Before the ceremony at the Munich Conference on Security Policy, Mrs Clinton said the treaty was "another example of the kind of clear-eyed co-operation that is in everyone's interests".
She said that Washington was also was in talks with Russia about how the two countries can work together on other issues affecting their common security.
Mr Lavrov called New Start "a product of the understanding that unilateral approaches to security are counterproductive".
"The treaty that enters into force today will enhance international stability," he said.
The New Start treaty limits each side to no more than 800 deployed nuclear warhead delivery systems including bombers, missile launchers and nuclear submarines - a cut of about 50%.
It limits each side to 1,550 deployed warheads.
It will also allow each side to visually inspect the other's nuclear capability, with the aim of verifying how many warheads each missile carries.
Tweet
Pope Shenouda Article