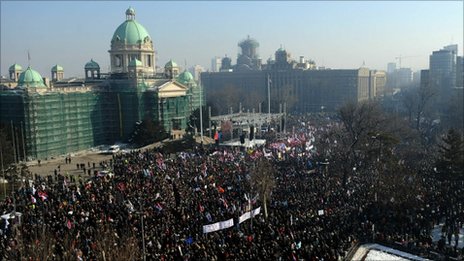 The Serbian capital Belgrade has seen its biggest anti-government protest in years as thousands of disenchanted Serbs demanded early elections.

At least 55,000 people turned out in front of parliament after the opposition Serbian Progressive Party called the rally.
Party leader Tomislav Nikolic gave the government two months to call polls or face a civil disobedience campaign.
Serbia's economic woes have continued as it moves towards EU membership.
There is rising discontent over high prices, low salaries and a stalled economy.
A disparate 10-party coalition, united around EU integration, has been in power since 2008, led by Prime Minister Mirko Cvetkovic and President Boris Tadic.
The next general election is not scheduled until 2012.
'Unfulfilled promises'
The BBC's Mark Lowen in Belgrade says authorities had feared a repeat of the violence of previous protests, but the day remained peaceful.
Police put attendance at the rally at 55,000 people while an AFP news agency correspondent reported 70,000.
As riot police stood by, protesters, some of whom had arrived by bus from cities across Serbia, gathered in front of parliament holding banners reading "Democratic Party, time to go" and "We are hungry".
Police closed off parts of the city centre to accommodate the demonstration.
Clearly referring to events in Egypt and Tunisia, Mr Nikolic told the protesters: "Elsewhere in the world people are telling governments they should listen to the people.
"I know you are disenchanted and bitter over this dishonest government which is tormenting you. Let us torment government instead."
He warned that if elections were not called in two months' time, he would begin a sit-in outside parliament.
Mr Nikolic - formerly the head of the ultra-nationalist Radical Party - founded the Serbian Progressive Party less than three years ago. But his popularity is now such that he poses a serious threat to the government, our correspondent says.
Saturday's show of strength will rattle a government that is determined to hold on to power, he adds.
Mr Nikolic's party is seen as the strongest opposition challenger to the Serbian Democratic Party, which leads the coalition.
"I was not a Nikolic voter in the past but now I am so disillusioned because of unfulfilled promises, poverty, corruption and hardship," metal worker Dragomir Djuric, 56, told Reuters news agency.
Tweet
Pope Shenouda Article