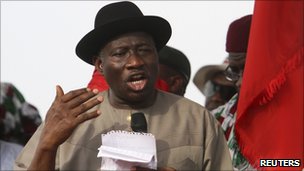 Eleven people have died in a stampede at an election rally in Nigeria.
The rally in the southern city of Port Harcourt was part of President Goodluck Jonathan's election campaign ahead of a poll due in April.

At least 29 others are said to have been injured at the rally, which was held in a crowded sports stadium.
President Jonathan has ordered an investigation and said the incident was "sad, unfortunate and regrettable," adding: "I mourn with those who mourn."
The president launched his election campaign earlier this week
The crowd panicked after a policeman fired in the air to try to disperse crowds at the gates as people left the rally, according to witnesses.
"There was a huge crowd, the place was completely full," Ken Saro-Wiwa, President Jonathan's special assistant on international affairs, told Reuters news agency.
"It is a sad end to what had been a great day," said Mr Saro-Wiwa.
President Jonathan, whose People's Democratic Party have won every presidential vote since the return to civilian rule in 1999, is favourite to win April's election.
Tweet
Pope Shenouda Article