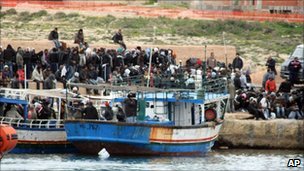 The Italian government has declared a humanitarian emergency after nearly 3,000 migrants have arrived in the country in the last few days.

Officials say most of the migrants are from Tunisia, which has seen continued turmoil since the 14 January overthrow of President Zine al-Abidine Ben Ali.
The declaration frees up funds and personnel to deal with the influx.
Most of the migrants have been trying to reach Italy in small boats and have been intercepted by the coast guard.
Italian officials said nearly 3,000 migrants had arrived on the island of Lampedusa in the last three days, swamping facilities there. The island is closer to North Africa than the mainland of Italy.
Ferries and planes have been pressed into service to transport the migrants to detention centres in Sicily and elsewhere in southern Italy so their identities can be checked.
On Friday, Interior Minister Roberto Maroni said it was possible that terrorists and al-Qaeda supporters as well as common criminals could be using the confusion of the exodus to enter Europe.
Also on Friday, Mr Maroni and Foreign Minister Franco Frattini requested "the immediate deployment of a Frontex mission for patrolling and interception off the Tunisian coast".
Frontex is the EU's border security agency.
The UN's refugee agency says some of the migrants are seeking asylum from the political upheaval in Tunisia while others are fleeing poverty.
Tweet
Pope Shenouda Article