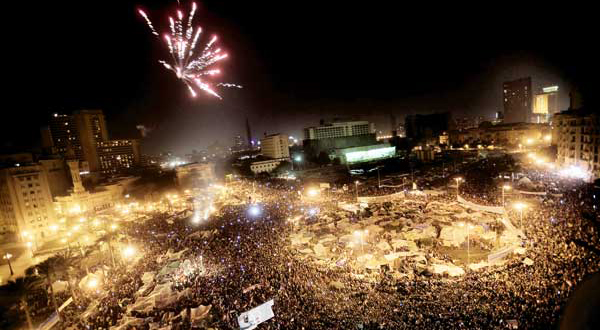 CAIRO: Egypt’s President Hosni Mubarak stepped down on Friday, assigning the Supreme Council of the Armed Forces to run the country.

Vice President Omar Suleiman announced the president’s departure in a brief televised statement at 6 pm.
Mubarak has been in power since 1981.
Demonstrations have swept the country since Jan. 25, calling for the president to step down. Numbers of protesters increased gradually to reach hundreds of thousands.
The protests were mainly peaceful, despite a violent crackdown that reached its height on Jan. 28-29 and Feb. 2. Over 300 protesters were killed and thousands wounded.
Friday, Feb. 11, which was planned by the protesters to commemorate the martyrs, had drawn the biggest numbers of protesters so far.
Instant celebrations broke out across the country. Fireworks, horns, ululations and cheers were heard from Heliopolis to Tahrir Square, the symbolic epicenter of the revolution.
In Alexandria, Seham Hendwai, housewife, said, “It’s the first time to feel victory; Mubarak was defying 80 million people.”
But the scene was different less than 24 hours before. Mubarak was expected to step down on Thursday night after several officials indicated he would leave. Instead, in a disappointing speech, he delegated some powers to Suleiman, leaving hundreds of thousands of protesters frustrated and angry.
Amid the celebrations on Friday night, voices rose to rebuild the country. Circulating mobile phone messages encouraged people to clean Tahrir Square, where protesters have been camped out since late January. Others called for keeping the country clean, respecting traffic laws, and not paying bribes. “The country is yours now,” read one message.
Concerns about the political and constitutional scenarios arose.
The Supreme Council of the Armed Forces, in an ongoing session, quelled fears in its third statement made within two hours of Suleiman’s announcement, saying the army will not undermine the legitimacy of the state. The Council said that it will make more announcements later about its plans and the steps it will take in the coming period.
Amr Hashim, senior researcher at Al-Ahram Center for Strategic and Political Studies, believes that the army is capable of handling the situation in Egypt in the current transitional phase, which may take from six months to one year.
"This phase will be followed by drastic changes in the constitutional and political platforms of the country," Hashim told Daily News Egypt.
On Friday morning, the Supreme Council of the Armed Forces said in a statement that it will guarantee the delivery of Mubarak and Solieman's vows including the transition of power, achieving democracy, constitutional reforms and lifting emergency laws.
Raafat Fouad, professor of constitutional law, said, “The fact that the army has been granted the jurisdictions to run the country entails both the executive and legislative powers. Hence, there will be no presence for the current government or the vice president.”
“Now, the whole matter is controlled by the Supreme Council of the Armed Forces. As for the judiciary, it is independent,” Fouad explained.
The constitution and the regime are closely connected. “In constitutional law, the regime means ‘the constitutional rulership,’” he said.
“This revolution aimed to overthrow the regime as well as call off the constitution that supported it.”
According to Fouad, the fact that Mubarak has stepped down in turn means the cancellation of the current constitution.
“Or else the demands of the Egyptian people’s revolution have not been met yet,” he argued.
“When the 1952 Revolution took over, it called off the 1923 constitution,” Fouad said. “It is illogical that Mubarak leaves and the constitution that gave him all these jurisdictions for over 30 years remains.”
Fouad believes that both the People’s Assembly and the Shoura Council will be dissolved following the end of Mubarak’s regime.
“The current parliamentary system is over. It does not even need to be dissolved as it is null and void because it was formed through vote rigging,” he said.
"The Council would either transform into a transitional government or appoint a transitional government formed of technocrats and military men and make a constitutional announcement for this transitional period," said Nabil Abdel Fattah, political expert at Al-Ahram Center for Strategic and Political studies.
"The People’s Assembly and Shoura Council will be dissolved and the transitional government will incorporate the legislative authority until new elections are held," he added.
According to Abdel Fattah, an amendments plan would be announced and a special committee would put in place a new constitution and new laws for the elections.
He ruled out the possibility of the military monopolizing power, given the large scale of protests and popular uprisings that took place.
"This other scenario entails a military government which would be regarded as setback as Egypt would remain within the old regime that ruled it since 1952," Abdel Fattah said.
"This isn't likely because in this case, the regime was forced to step down by the people and hand power to the military and not through a military coup," he added.
Hashim is optimistic about the role of the army.
"I have a belief that the army paved the way for the protesters today to reach El-Orouba [Presidential] Palace and the Maspero [State TV] building to give Mubarak an impression that it could not stop the protesters," Hashim argued.
"Mubarak accordingly headed to Sharm El-Sheikh and then most probably to the Gulf," he added.
Tweet
Pope Shenouda Article