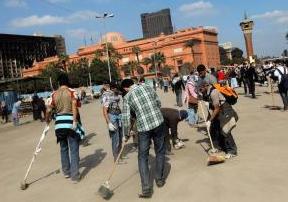 CAIRO - Pro-democracy activists in Al Tahrir Square vowed on Saturday to stay there until the Higher Military Council now running Egypt accepts their agenda for reform.

In two communiques issued overnight, a core group of protest organisers demanded the lifting of a state of emergency used by deposed President Hosni Mubarak to crush dissent and opposition.
“People’s Communique No. 1” demands the dissolution of the cabinet Mubarak appointed on Jan. 29 and the suspension of the parliament elected in a rigged poll late last year.
The reformists want a transitional five-member presidential council made up of four civilians and one military person.
The communique calls for the formation of a transitional government to prepare for an election to take place within nine months, and of a body to draft a new democratic constitution.
It demands freedom for the media and syndicates, which represent groups such as lawyers, doctors and engineers, and for the formation of political parties. Military and emergency courts must be scrapped, the communique says.
Tweet
Pope Shenouda Article