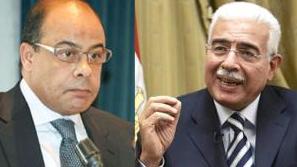 The prosecutor also banned Minister of Information Anas el-Fekkai and the widely despised former interior minister Habib al-Adly from travelling and froze his assets, MENA said.
The two ministers were fired along with the rest of the government in a failed bid by Mubarak to placate protesters in the early days of the uprising that led to his resignation on Friday after 30 years of autocratic rule.
MENA added the asset freeze applied to Adly and his family and was linked to the transfer of some four million Egyptian pounds ($675,000, 500,000 euros) from a private contractor to his personal account.
The chief prosecutor has ordered the foreign ministry to freeze the assets of several former ministers as well as steel magnate Ahmed Ezz, a top official in Mubarak's National Democratic Party (NDP).
The public prosecutor had announced a travel ban and asset freeze on several former officials on February 3, but until Saturday it was unclear if they were still in effect following Mubarak's resignation.
Those being investigated include Ezz, former housing minister Ahmed al-Maghrabi and former trade and industry minister Rashid Mohammed Rashid. Rashid said last week he would return to Egypt to face the accusations.
On Friday, Mubarak handed power over to the Supreme Council of the Armed Forces following an 18-day national uprising motivated in part by widespread accusations of corruption.
Much of the protesters' fury was directed at Adly and the police force he oversaw as interior minister, which has been accused of widespread torture and extortion and was used to crack down brutally on political dissent.
The military council now ruling the country said on Saturday it would embark on a transition to democratic and civilian rule but that the current government would remain in place until a new one could be sworn in.
Tweet
Pope Shenouda Article