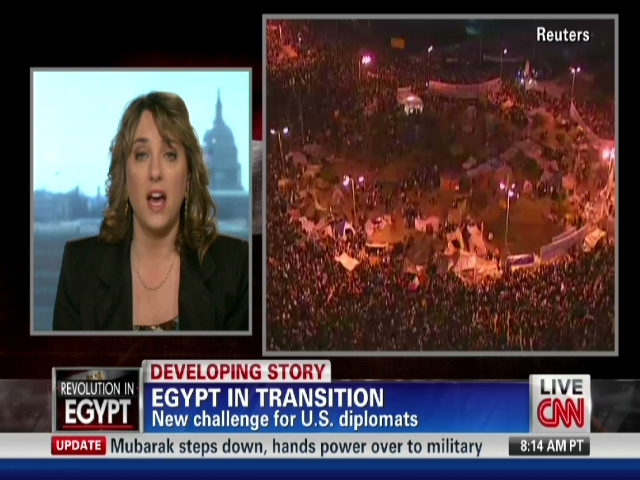 Washington (CNN) -- The Obama administration launched into diplomatic outreach throughout the Middle East Saturday, even as it tries to determine the composition of the Egyptian military council and the line of authority in the future Egyptian government.

While the U.S. is already familiar with the players of the council, it is still unclear who is handling diplomatic issues, senior officials said.
"They will have to clarify who is now the head of the government," one senior State Department official said. "We have to figure out the pecking order."
But the official added, "Whomever the Egyptians chose, we can have a relationship and deal with that person." He spoke anonymously due to the sensitivity of the ongoing diplomacy.
A big unanswered question is the future of Vice President Omar Suleiman, the official said.
Top State Department officials are contacting every Arab foreign minister, and Secretary of State Hillary Clinton is expected to call leaders in the region this weekend, officials said. Clinton also is dispatching Under Secretary William Burns to Jordan to discuss "the historic events in Egypt as well as a range of other regional and bilateral issues," a State Department statement said. Burns, the No. 3 official at the State Department, previously served as an ambassador to Jordan.
Adm. Michael Mullen, chairman of the Joint Chiefs of Staff, is headed to Israel on a scheduled visit, and will visit Jordan as well.
Diplomacy between the United States and Egypt been effectively cut off, said a Republican congressman familiar with the administration's efforts. The congressman briefed reporters Friday afternoon on the condition they not use his name. "It's been very difficult to get information through normal diplomatic channels given the rapid changes. And you can imagine, they don't want to sit down with an American right now when they've got their whole world kind of collapsing on them as we speak," the congressman said.
State Department officials acknowledged it has been hard to reach members of the new Egyptian government during the last 48 hours.
U.S. Ambassador to Egypt Margaret Scobey has had some contact with the foreign ministry, and Defense Secretary Robert Gates and Mullen had some contact with their military counterparts. Gates spoke with Egypt's defense minister, Field Marshal Mohammed Hussein Tantawi, on Saturday, U.S. spokesman Geoff Morrell said.
The discussion, Gates' sixth phone conversation with the Egyptian Defense Minister since the situation in Egypt began, is the first high-level contact between the two governments since President Hosni Mubarak resigned. U.S. and Egyptian officials said they expected the two sides to resume broader and more regular consultations this weekend.
The senior State Department official said the United States was carefully watching what will happen on Saturday with protesters in Cairo. The military had suggested it could rescind the emergency law if the protesters were to go home, so the U.S. wants to "lock in that gain."
"They have achieved everything they wanted to achieve so we want to see if the protesters take a breath now," the official said.
However, CNN's Arwa Damon reported Friday that some protesters intended to keep up the demonstration with more demands, including putting Mubarak on trial.
Additionally, the official said the U.S. would be looking to see whether a broader-based group of members of the opposition would join the political process now that Mubarak has stepped down.
"The most significant issue in the transition has been resolved, Mubarak has given up all powers and that removes the most significant obstacle to the transition process," the official said.
Additionally, because the military was not forced between defending Mubarak and siding with the people, it has been able to safeguard its credibility and relationship with the country, the official said.
In addition to lifting the emergency law, there were myriad issues that needed to be addressed, such as constitutional changes and judgments about how inclusive the government will make the political process, and what roles the opposition might have in the transition, the official said.
Tweet
Pope Shenouda Article