Contemplations on a revolution 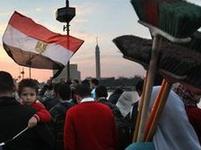 Despite the struggle of mainstream Egyptians to go back to striving for their livelihoods in a semblance to their ‘normal’ daily routine, revolutionary wrath is still ablaze across the country. Even though most Egyptian regions are bristling with demonstrations, it remains a fact that Tahrir Square, situated in the very centre of Cairo, has become the vibrant heart of the revolution. As the hub that attracts Egyptians from all walks of life to express their discontent and demand legitimate rights, Tahrir has become the centre of attention of both local and international media. This brings to mind the bloodless worker revolution in Gdansk, Poland, in 1989, considered by many to have been the beginning of the downfall of communism, first in Poland and later in the Soviet Union.

I consider it a great honour that Egypt’s revolution of wrath is dubbed the ‘revolution of youth’. It is the anger, revolt and resolve of Egypt’s young people that fuels the call for reform. But if youth is the soul of the revolution, reason and wisdom should govern it. On TV talk shows and interviews, young Egyptians talked with emotion and sincerity, but their word exposed a blurred vision when it came to a system for the implementation of the aspired reform. Thus, while everyone applauded Egypt’s youth for instigating the revolution of wrath, I remain wary lest the impulsiveness of the young people should stand in the way of listening to the reason and sense needed to direct the path of the revolution and to prevent Egypt from slipping into anarchy or from falling prey to opportunists with special agendas. It is time that Egypt’s youth realise that their fury is no longer theirs alone; the revolution is now Egypt’s in its entirety. It is imperative that the young people benefit from the wisdom and experience of those who are older and wiser in order to achieve the required reform. If our young fall short of fulfilling their whole dream, they should be content with what has already been accomplished—and this is not little—and not reject it all. What was not accomplished in a first phase can definitely be accomplished in phases to follow.
For now, however, I must admit that I agree with the young people in their lack of confidence in the ‘implementers of the reform’, be that the regime, the committees in charge of studying constitutional or legislative reform, or even the security apparatus in its ‘new look’. Unfortunately, the young people’s experience with the authorities reads like a long history of deception, sidelining and procrastination, in addition to the monstrous security abuse of peaceful opposition, giving Egypt a deserved reputation of being a police State.
It has become of the utmost importance to go ahead with the measures for reform; it should not stop at the transparency and lucidity with which the Vice President Omar Suleiman and Prime Minister Ahmed Shafiq tackle matters in their declarations and meetings. Reform has to involve tangible measures that would guarantee the revolutionary youth would not be harassed. The previous security apparatus should be taken to account for its horrendous crime of countering the wrathful revolution with undue violence, then later withdrawing from the field and abandoning its role in protecting citizens. This served to throw the country into a state of chaos the repercussions of which are still reverberating through the community and are the talk of the world.
To retaliate for its failure in containing the anger of the youth, the former security apparatus chose to punish all Egyptians by leaving them to fend for themselves against criminals who, tempted by the absence of the security, went on a vicious wave of violence, devastation, robbery and terror. This cannot be left unchecked or unpunished. It is still a mystery that awaits investigation why the police withdrew from Egypt’s streets giving way to a series of outrageous attacks between anti and pro Mubarak crowds? The army’s deployment was undoubtedly a sound decision that only implied the retreat of the special forces, not the police.
Contemplations on the revolution of wrath are endless; events change by the hour, ameliorating these thoughts. But of course we are witnessing a great revolution that will be recorded by history, a revolution that moved Egypt from the 23 July 1952 era to a new one that began on 25 January 2011.
Tweet
Author