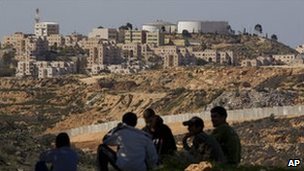 The US has vetoed an Arab resolution at the UN Security Council condemning Israeli settlements in the Palestinian territories as an obstacle to peace.
All 14 other members of the Security Council backed the resolution, which had been endorsed by the Palestine Liberation Organisation (PLO).
It was the first veto exercised by the Obama administration which had promised better relations with the Muslim world.
A Palestinian official said the talks process would now be "re-assessed".
Washington was under pressure from Israel and Congress, which has a strong pro-Israel lobby, to use its veto.
The Obama administration's decision risks angering Arab peoples at a time of mass street protests in the Middle East, the BBC's Barbara Plett reports from the UN.
It had placed enormous pressure on the Palestinians to withdraw the resolution and accept alternatives, but these were ultimately rejected.
While stating that it opposed new settlements, the Obama administration argued that taking the issue to the UN would only complicate efforts to resume stalled negotiations between Israel and the Palestinians on a two-state peace deal.
"Unfortunately, this draft resolution risks hardening the positions of both sides," said the US ambassador to the UN, Susan Rice.
The resolution, sponsored by at least 130 countries, declared Israeli settlements in Palestinian territories were illegal and a "major obstacle to the achievement of a just, lasting and comprehensive peace".
Speaking from Ramallah in the West Bank, PLO secretary general Yasser Abed Rabbo said the US veto was "unfortunate" and "affected the credibility of the US administration".
Israeli Prime Minister Benjamin Netanyahu welcomed the US veto, adding that his country remained committed to "a solution that will reconcile the Palestinians' legitimate aspirations for statehood with Israel's need for security and recognition".
Britain, which voted in favour of the resolution, called on Israel and the Palestinians to resume talks because of the gravity of the stalemate between the two sides.
Referring to recent events in Egypt and other Arab states, Foreign Secretary William Hague said the parties involved should not be "diverted by events in the wider region from working towards a just and lasting resolution to the Israeli-Palestinian conflict".
"I call on both parties to return as soon as possible to direct negotiations towards a two-state solution, on the basis of clear parameters," he added.
Tweet
Pope Shenouda Article