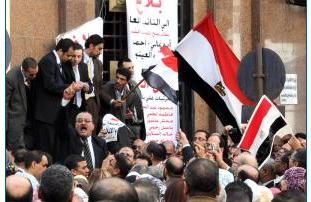 CAIRO - Workers at Egypt's largest factory will continue striking, an independent labour group said on Saturday, in defiance of warnings by the ruling military junta that it will no longer tolerate protests.

Around 15,000 workers from the Misr Spinning and Weaving -which employs 24,000 people in the Nile Delta city of Al-Mahalla al-Kubra - "are holding a sit-in for a fourth day in front of the administration building," the Centre for Trade Union and Workers' Services (CTUWS) said in a statement.
"The workers have refused to end their protest until their principal demand is met, and that is to remove the head of the company Fuad Abdel Alim," who is accused of corruption," it said.
On Friday, the Supreme Council of the Armed Forces, which took power after president Hosni Mubarak stepped down on February 11 - said the strikes are harming national security and will no longer be tolerated, after two initial milder warnings.
Some groups "organise protests that obstruct production and create critical economic conditions that can lead to a worsening of the country's economy," the military council said in a statement.
"The continuation of instability and its consequences will lead to harming national security," it added.
"The Supreme Council of the Armed Forces will not allow the continuation of these illegal acts which pose a danger to the nation, and they will confront them and take legal measures to protect the nation's security," it said.
The roughly 24,000 employees at the Misr Spinning and Weaving Company walked out on February 10 in support of demonstrations against Mubarak, who was ousted the next day after more than two weeks of mass protests across Egypt.
The strike was briefly suspended after Mubarak's resignation but kicked off again on Wednesday, with higher wages and new management in the workers' sights.
Misr Spinning and Weaving is the largest plant in the Egyptian textile industry, which employs 48 per cent of the country's total labour force, according to the CTUWS.
Tweet
Pope Shenouda Article