Hundreds of thousands flock to Tahrir to celebrate, voice demands 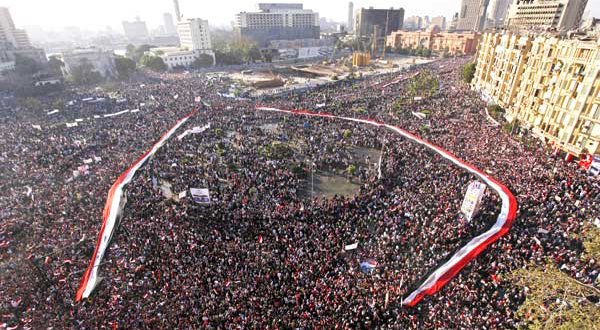 CAIRO: Hundreds of thousands of Egyptians flocked in Tahrir Square on Friday in a gathering reminiscent of the 18-day-long demonstrations that led president Hosni Mubarak to step down on Feb 11.

On Feb. 18, dubbed the “Friday of Victory,” people came to celebrate the ouster of Mubarak after 30 years in power and to reiterate their demands for reform. They also wanted to honor over 365 killed in protests.
Before Friday prayers, a military band played a variety of national and patriotic songs to the cheers of the growing crowd.
Sherif Ismail, 30, came to Tahrir with his three children “to honor the martyrs who died for our freedom.”
Families of some of the martyrs were also present at the square.
“I want people to remember those who sacrificed their lives for them,” Amal Mohamed Gaber, 47, whose son Ahmed, 19, was shot dead with live ammunition in a protest on Jan. 31.
Leila Abdel Kerim, a 39-year-old housewife and mother of four, came to celebrate with her family.
“We’ve come to celebrate and I’m against all the employees who went on strike especially now demanding reform and increase in salaries,” Abdel Kerim’s husband, Mohamed Abdel Rahman, 37, told Daily News Egypt. “Things won’t improve overnight. The revolution isn’t a magic lamp that will immediately solve the people’s problems.”
“We need to be productive now and rebuild our country,” Abdel Rahman added.
Mostafa, nine, said this was the first time he’s ever come to Tahrir Square.
“I’ve come to celebrate the victory of all the Egyptian people,” he said.
Others called on the army to implement their demands for reform and democracy, including the annulment of the emergency law, the formation of a new government instead of the one handpicked by the ousted Mubarak, the release of the detainees and the prosecution of those responsible for killing protesters.
“I’m not a young man, but the youth of Jan. 25 moved me and encouraged me to come to Tahrir and woke Egyptians up from their long slumber,” 50-year-old Magdi Zaghloul, a former inspector in the Ministry of Social Solidarity, said.
“I want the people who were responsible for killing the martyrs to be prosecuted in Tahrir Square in front of everyone,” Zaghloul said. “And I call on the army to remove the corrupt government and form a new government of honorable, decent people.”
Ashraf, a 25-year-old salesman, marched around the square holding a cross along side his Muslim friends holding the Quran, demanding reform.
“We want to end corruption and we want Habib El-Adly to be prosecuted for the martyrs that died during the revolution and during the church bombing on Jan.1,” Ashraf said.
“There was never any strife between Muslims and Christians in Egypt; the former regime is the one who created that through its policies and crimes,” he added.
Unconfirmed reports suggested that former Interior Minister Habib El-Adly was involved in the Alexandria church bombing that took place on New Year’s Eve.
“There’s a lot of manipulation and stalling when it comes to the revolutionaries’ demands,” physical education instructor, Ali Bassam, said. “We don’t want the emergency laws or state security. …State security didn’t protect the country; it protected the previous corrupt regime.”
“The National Democratic Party should be called the party that worships the chair and authority and we don’t want them to rule us any longer,” Bassam added.
“Members of the corrupt regime who are still in power will do everything to bring down the revolution and cause its failure, to save their necks from prosecution,” lawyer Mahamoud El-Hawary, 38, said.
The crowd, estimated to be between 1 and 2 million according to different media reports, chanted repeatedly, “The people want to topple corruption.”
A 37-year-old protestor who works in commerce and preferred to remain anonymous claimed that the army detained him and 20 more on Feb. 11 from Tahrir Square. He added that they were tied, blindfolded, tortured with electric shocks and beaten.
They were accused of attacking a soldier. “But we didn’t attack anyone, our relationship with the army was very good until that day,” he said.
He added that the soldiers accused them of destroying the country and preventing them from taking any time off.
“We want the army to educate … its soldiers to respect us,” he told Daily News Egypt.
Amnesty International accused the military police of torturing political detainees and urged the army to stop its violations.
Many of those in Tahrir on Friday came with their own set of grievances, hopes and demands.
Ismail Abdel Monem, 42, a clothes vendor, hoped his trip to Tahrir Square would save his business. He complained about clothes being smuggled from china and Port Said, and sold for cheap prices harming his business.
Haya El-Dahy, a 60-year-old housewife took her paralyzed 19-year-old son to Tahrir in a bid to solve her accommodation problems and get a new home.
Dozens of Al-Azhar scholars also marched through Tahrir square calling for the independence of this religious and learning institution from the government, including the right to elect the grand sheikh of Al-Azhar instead of a state-appointment.
Tweet
Pope Shenouda Article