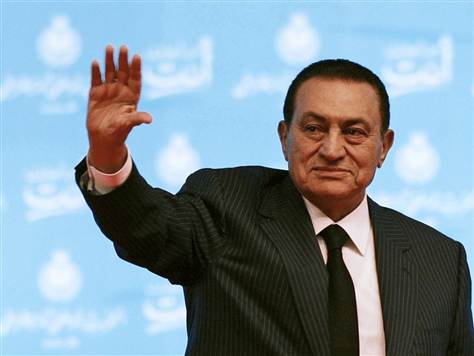 CAIRO: Contrary to several news reports suggesting that ousted president Hosni Mubarak’s health is deteriorating, “a well-placed” source told ABC news that he “was well enough to have breakfast on the beach today and is doing well.”
After stepping down last Friday, Mubarak has been residing is the resort town of Sharm El-Sheikh, along with his two sons Gamal and Alaa. The wives and children of his sons, however, have left the country, the source said.
His personal physician is also with him in Sharm El-Sheikh.
The source also told ABC that the Supreme Council of the Armed Forces was “shocked by the level and scale of corruption by the Mubarak regime.”
Furthermore, details also emerged on how Mubarak came to leave office, including how General Mohammed Hussein Tantawi, defense minister, was authorized by the council to visit Mubarak in his palace after the latter’s statement on Feb.10.
As part of a deal for Mubarak to step down, he asked for and received guarantees from the military that he would be protected and not prosecuted, the source said.
Mubarak's newly appointed Vice President Omar Suleiman, who is the former intelligence chief, read out the statement announcing Mubarak's resignation on Friday Feb. 11. He too has left the political sphere and is no longer vice president, the source told ABC News.
Tweet
Pope Shenouda Article