Military and police reach out through social media 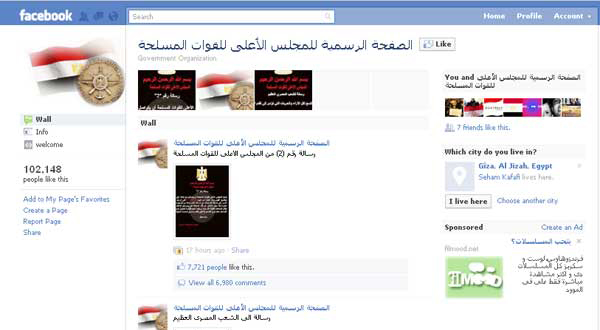 CAIRO: Only after the Egyptian police led the trend and a Facebook group last week that Egypt's military junta became the website's newest user.

The fact that Egypt's latest uprising that led to the ouster of Egypt's strongman Hosni Mubarak was organized by youth using social media like Facebook and Twitter attracted Egypt's military and police to do the same: communicating and reaching out to the public via social media.
The Supreme Council of the Armed Forces dedicated the page "to the sons and youth of Egypt who ignited the January 25 revolution and to its martyrs."
It said the page was established by the head of the council, Field Marshal Hussein Tantawi, who felt that "fruitful cooperation in the coming period with the honorable sons of Egypt would lead to stability and security."
One of the page’s members, Walid Shahin, suggested steps be taken to revive the vital tourism sector following the uprising, which saw thousands of foreigners flee the country, emptying out its ancient sites, including the Pyramids.
Ahmed Abdullah wrote: "We want an open page... so that you can feel the pulse of the street without a mediator."
Meanwhile, the police’s page tried to appease Egyptian's mounting anger amid the police crackdown on protesters and its withdrawal from the streets which led to a wave of thuggery and looting around the country.
The page admins were keen to post videos related to the arrest of well-known business tycoons and government officials, saluting the souls of the martyrs, and defending the stance of the police regarding the latest protests.
"We are members of the police forces who felt humiliated and hurt when we heard the word ‘withdrawal’,” a post by the page’s administrators read. “We did not have orders from our leadership."
In a statement on the Ministry of Interior’s official website, Minister of Interior Mahmoud Wagdy addressed visitors about renewing the services of the website.
"Out of the ministry's national responsibility, the ministry modernized security services."
Most of the comments conveyed distrust in the police's intentions. "Will I be well-treated by you again? Are you going to live up to your oath?" asked Mohamed Ibrahim Ali.
The National Democratic Party’s (NDP) official website was hacked and blocked in reaction to Mubarak's regime cutting off internet and mobile phone networks all over Egypt when the protests started
Tweet
Pope Shenouda Article