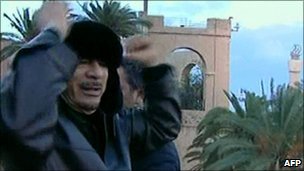 People in the Libyan capital, Tripoli, are braced for further battles after the country's leader, Col Muammar Gaddafi, said he would open weapons depots to arm his supporters.

The evacuation of thousands of foreign workers continues by air, by sea and overland, but some remain trapped.
The US has blocked transactions involving the assets of Col Gaddafi and some close associates.
The UN estimates more than 1,000 have died in the 10-day-old revolt.
On Friday, an anti-government demonstration in Tripoli came under heavy gunfire.
The AP news agency says it has been told Col Gaddafi's government is arming civilian supporters to set up checkpoints in Tripoli and quash dissent.
Residents who spoke to AP by phone on Saturday reported trucks of pro-Gaddafi civilians patrolling the streets.
Arming tribes
At the same time, Libyan state TV showed Col Gaddafi speaking from Tripoli's old city ramparts.
"We shall destroy any aggression with popular will," he said. "With the armed people, when necessary we will open the weapons depots. So that all the Libyan people, all the Libyan tribes can be armed. Libya will become a red flame, a burning coal."
Much of the country, especially the east, is now controlled by anti-Gaddafi forces, including military units who have switched sides. However, the Libyan leader still holds the most of Tripoli, which is home to two million of the country's 6.5 million population.
One of Col Gaddafi's staunchest defenders, Italian Prime Minister Silvio Berlusconi, said on Saturday: "It appears that, effectively, Gaddafi no longer controls the situation in Libya."
Late on Friday, Col Gaddafi's son, Saif al-Islam, said the number of deaths had been exaggerated, though he confirmed the Libyan air force had bombed four ammunition depots.
He reiterated his father's statements, blaming al-Qaeda for the uprising.
US President Barack Obama has signed an executive order, freezing the assets of Col Gaddafi, members of his family and senior officials. The president said he was also seizing Libyan state property in the US, to prevent it being misappropriated by Tripoli.
The UN Security Council will meet later on Saturday (1600 GMT) to consider further measures.
A draft resolution, backed by Britain, France, Germany and the US, calls for an arms embargo, a travel ban and the freezing of assets in response to the bloodshed.
There is also a proposal to refer Col Gaddafi to the International Criminal Court on charges of crimes against humanity.
Evacuations are continuing. Thousands of foreign nationals from the UK, the US, European and Asian countries have been fleeing the violence.
However, hundreds of foreign workers are in remote and possibly vulnerable locations, with no way of getting to airports or coastal areas.
The BBC's Jim Muir, on Libya's western border with Tunisia, says several thousand Egyptian migrant workers are stranded there, with no obvious way of getting them home.
The problem is getting worse by the hour, our correspondent says.
The Tunisian army and voluntary organisations are doing what they can to help, but most of the travellers are spending the cold night out in the open, huddling in blankets they carry with them, with no sanitary or other facilities.
Tweet
Pope Shenouda Article