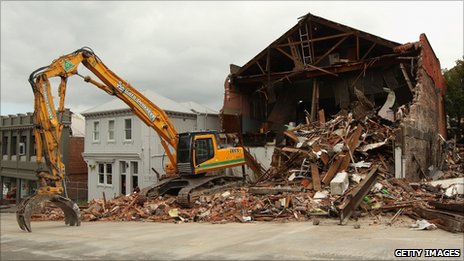 Searches continued for the hundreds who are still missing.But for some family members of the missing, hope was fading.
Police in the battered town said Friday that more than 200 people still missing. Many of the missing were feared dead.
Included in that were all the people who were in the Canterbury TV building that toppled in the Tuesday earthquake.
Police say they have "grave fears" for all who were in the building including 90 students and staff from the King's Education language school -- headquartered on the third floor.
Donna Tai Rakena's husband Tetaki was an English teacher and was working there when the quake struck.
After the shaking ceased, she said she called his cell phone and got no answer.
She jumped on her bike and pedaled down to the fallen building to see if she could find her husband in the mess of mangled steel and rubble.
Police broke the news to her: Her soul mate of 30 years, the man she affectionately called Wally, was believed to be dead.
"They said they'd gone into recovery mode and there was no hope of anyone coming out alive," she said.
She now clings to hope that crews will at least find her husband's body.
Rescue and recovery crews have been combing through damaged buildings since the quake struck three days ago -- toppling buildings, buckling streets and ripping the facades of iconic churches, including the Christchurch Cathedral and the Cathedral of the Blessed Sacrament.
A series of aftershocks followed.
Southern New Zealand has been hit by a series of quakes since September 4 when a 7.1-magnitude temblor struck the area. There were no deaths from that quake, which struck deeper below ground and farther away from Christchurch.
Tuesday's earthquake was part of the "aftershock sequence" from the September earthquake, the U.S. Geological Survey said.
Tweet
Pope Shenouda Article