Tens of thousands in Tahrir call for removal of government 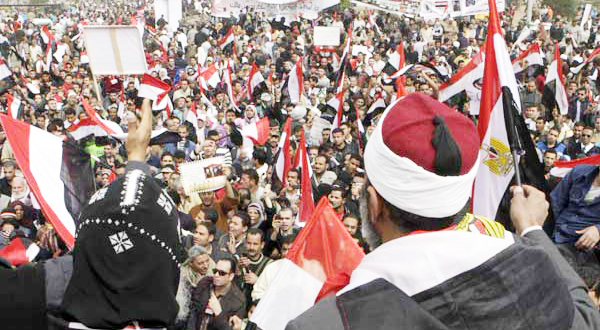 CAIRO: Tens of thousands gathered in Tahrir Square in what was dubbed the “Friday of Cleansing and Protecting the Revolution,” demanding the resignation of the current government headed by Prime Minister Ahmed Shafiq.
Though the number of people in Tahrir was markedly less than the Friday before, participants’ chants resounded in the area, calling on the army to push more reforms.
Protesters also demanded the release of all political detainees, dismantling the State Security apparatus and annulling the emergency law.
In his speech at Tahrir, Islamic scholar and member of the Muslim Brotherhood, Safwat Hegazy said, “We don’t want merely a change of names in the government with one thief resigning and another one taking his place.”
“Shafiq is [ousted president Hosni] Mubarak’s most prominent student,” he added.
“State Security is standing between us and freedom,” Hegazy and the protestors chanted.
Hegazy also called for the prosecution of former parliament speaker Fathi Sorour and former secretary general of the National Democratic Party (NDP) Safwat El-Sherif, labeling them corrupt members of the former regime.
Political detainees are still being held in Wadi Natroun Prison, specifically Cells 7 and 8, he said, adding that prisoners who were sentenced by military courts should be released.
“We want all political detainees to be released especially (Muslim Brotherhood members) Hassan Al-Malek, Hassan Suleiman and Khairat El-Shater, who were arrested merely for being members of the Brotherhood,” Mohamed Hassan, a government employee, told Daily News Egypt.
They were convicted of money laundering before the January 25 Revolution, he added.
“Mubarak and his corrupt gang are the ones who robbed the country, not these good people,” Hassan said.
Sheikh Reda Ragab and Father Khazman walked hand-in-hand through Tahrir Square, welcomed by warm applause and cheering from protesters chanting: “Muslim or Christian, we are all one.”
Ragab spoke to protesters in Tahrir, saying, “We came here today to show the world that there is no sectarian strife in Egypt. The former regime is the one that caused this strife and fuelled it.”
“The time of injustice and strife has passed,” protesters chanted.
Khazman said, “The youth who made this revolution have to lead the government and lead reform in this country. And it’s our duty to fight for them.”
Stickers were distributed among the crowd, including one that read “Ahmed Shafiq = The new Hosni Mubarak.”
In one corner in Tahrir, repairman Magdi Iskandar, 46, spread dozens of banners he created in the street. One of the banners addressing Egypt’s army read: “I want to know whose side you are on.” Another one said: “We are the grandsons of the Pharaohs and we taught the whole world the true meaning of freedom.”
“I am a simple man but I understand my country very well and I just want people to live with dignity and feel that the country is theirs,” Iskandar said
“Mubarak is still giving orders to the army and Shafiq on how to rule the country over the phone,” Iskandar claimed. “The Egyptian people won’t be fooled.”
“How can Shafiq prosecute the criminals from the previous corrupt regime, when he is in fact part of it,” Mahmoud Abdallah, 30, a member of the Coalition of Jan. 25 Youth, told DNE.
“The armed forces need to do a lot of in this transition period, most prominently change this transitional government,” Shaimaa Abdel Azim, member of the National Association for Change, said. “This government has officials who were involved in the corrupt regime and have complaints filed against them including Shafiq.”
A student of mass communications in Cairo University, Ahmed Hassan, spread his caricatures of the previous regime and called for the independence of universities.
“We want university deans to be elected, we want independent universities,” he said.
Engineer Ahmed El-Sayed, who was in Tahrir with his daughters, said, “This government doesn’t represent us. The army needs to understand that it rules the country in the name of the people and must heed to the people’s demands.”
“We want detainees to be released and the annulment of the emergency law, which does not take a lot of time to execute.” Menna Ahmed, 16, said.
Many present showed solidarity for Libyans as they protest demanding the ouster of President Moammar Qaddafi.
“The Libyans need medical aid and medicine and we can deliver that with peoples’ help,” Aynour Hassan, an interior designer, said.
Tweet
Pope Shenouda Article