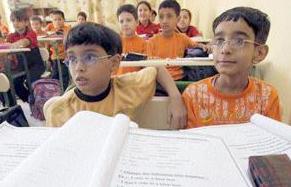 CAIRO - A committee consisting of specialists from the Centre for Curricula Development and the Ministry of Education, and other educational experts are revising history textbooks in light of the Youth Revolution of January 25.

These experts, in collaboration with the authors of the above textbooks, have agreed to delete parts of the curriculum relating to the National Democratic Party (NDP), while their opinions vary about the parts dealing with the projects of and activities relating to Suzanne Mubarak, wife of the ex-President. Professor of history Ismail Zein Eddin of the Faculty of Arts, Cairo University, is the author of a history textbook for schoolchildren in grade six of the primary stage and grade three of the preparatory stage. He says that steps have already been taken to remove the bits about the NDP, in time for the second half of the school year. "My book won the textbook competition organised by the Ministry of Education last year," he explains, stressing that he wasn't a member of the NDP and didn't have an electoral card. According to Zein Eddin, the committee has agreed to keep the picture of Suzanne Mubarak in his history textbook, appearing in a lesson that highlights her work with women and children. Other famous women in his book include Aisha Rateb, Egypt's first female ambassador and its second woman to become Minister of Insurance and Social Affairs; Doria Shafiq, one of the pioneers of the women's liberation movement in Egypt and a campaigner against the British occupation; and Tahani el-Gebali, the country's first woman judge. Prof. Zein Eddin notes that a new chapter is being prepared for third grade preparatory pupils, dealing with the events of January 25, including constitutional amendments. Inas el-Qadi, a social studies consultant at the Ministry, says that the textbook describes the NDP as the ruling party, which it was under Mubarak. “After the events triggered on January 25 and the torching of the NDP headquarters, the Ministry has decided to delete the bit about the NDP being the majority party,” says el-Qadi. Professor of Social Studies at the Educational Research Centre Aida Abu Gharib told Al-Shorouq independent newspaper that some of the authors of school textbooks have slipped up, because they didn't write them according to the Ministry's rules, which is why they have been rejected. These authors are in a dilemma, because they want to write in a scientific fashion, but at the same time they must espouse the Ministry's rules. According to Abu Gharib, in advanced countries, people who write history textbooks must consult historians and specialists in the fields of medicine, pharmacology, engineering and archaeology. A workshop was held on January 23 and 24, run by specialists from the Ministry of Education and the former Ministry of Family and Population, to teach people how to write history textbooks, including information about famous historical characters, both Muslims and Christians.