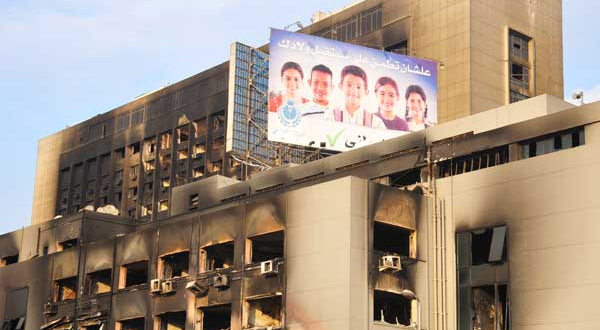 CAIRO: The National Democratic Party (NDP) is working on a major reform plan that includes changing its structure, name, slogan and programs and finding a new leader to succeed ousted Egyptian president Hosni Mubarak, a senior member said.
Mubarak, who stepped down on Feb. 11 after 18 days of nationwide demonstrations, remains the president of the ruling party, but only on paper, according to Maged Al-Sherbeeny, secretary for membership affairs and member of the NDP’s politburo.
The party is planning to hold a general assembly "once security conditions permit" to elect its new president to succeed Mubarak, Al-Sherbeeny told Daily News Egypt.
The NDP is also planning to compete in the upcoming legislative elections; however, it has yet to decide on the capacity of this participation.
He said that the NDP is adamant on participating in the upcoming elections but will not seek a majority.
"This comes as a gesture … to instill public confidence; however, we will decide on how we will participate according to the date of the elections and whether it will adopt the individual or rosters system," Al-Sherbeeny said.
"We must begin by eliminating this negative public stereotype of the party due to the accumulation of certain practices through the past years," Al-Sherbeeny said.
The three-phase plan includes restructuring the NDP starting from partisan units to the general secretariat to allow youth under 30 to form 30 percent of the party base and 25 percent of its general secretariat.
According to the plan, all leaderships in central units in governorates who contributed to the distortion of the party's public image or who exploited their posts will be replaced. The party will also modify some of its programs, focusing more on social justice.
A new name and slogan will be chosen for the party.
"We are creating a new party from within the old one, led by the reform stream inside the NDP," Al-Sherbeeny said.
"The party's basic principles are the same as those of the revolution; we are trying to attract public figures who are accepted by the people, believe in the party's principles and have leadership skills to rebuild the party," he added.
A board of trustees is set to be formed from these figures to run the party until a new president is elected.
The NDP’s headquarters was set on fire during the revolution and a number of its leaders are now facing corruption charges.
Al-Sherbeeny said that if this plan isn't implemented, he and others in the party will resign.
He urged Egyptians not to judge the party based on stereotypes and to avoid bias.
Tweet
Pope Shenouda Article