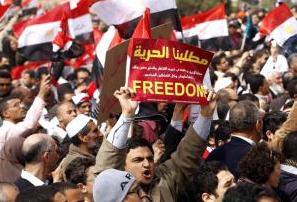 CAIRO - A certain disillusionment already has set in among the revolutionaries who began calling for the ouster of President Hosni Mubarak one month ago on Al Tahrir Square.
As revolutions go, they got their wish relatively quickly when Mubarak left office on February 11 just two weeks after they began demonstrating in large numbers.
Today the protests continue with new demands. Demonstrators on Al Tahrir Square are now calling for the removal of the interim government, the provincial governors, the National Democratic Party (NDP) and the emergency law.
The Facebook youths who unleashed the revolution are now discovering how easy it is to knock an obdurate old president from his pedestal compared with remaking a country with 85 million residents. The protesters dreamed of a new Egypt, but how it should look after the end of Mubarak's reign was never crystal clear.
'I believe we have achieved only 30 per cent of what we imagined,' said Ahmed Maher, one of two representatives of the April 6 Youth Movement on the executive committee of the protest alliance.
The 30-year-old engineer, one of the oldest among the youth activists, has just come from a committee meeting. He plans to attend another large demonstration this weekend on Tahrir Square.
He's tired, but he believes that Egyptians will manage to create a new government if the solidarity of the revolution doesn't fade. He is less optimistic about other countries in the region.
'For Tunisia and Egypt is is difficult to build a stable future, but in Libya it will be almost impossible because the madman (Muammar Gaddafi) has destroyed the country,' he said. 'The country has neither unions nor any kind of government opposition organisation.'
In a cafe near Tahrir Square there are signs of new beginnings. 'Together we can build a better Egypt. Please write your campaign ideas here so that we can work on  them hand in hand,' reads papers lying on the tables.
A young woman writes, 'Change our behavior, start with ourselves, remain honest and work hard.'
Nearby a fast food restaurant that was destroyed during the unrest is being renovated. But no one has replaced flagstones that were ripped from the pavement during street battles with thugs sent in by the regime.
According to dpa, The country is facing the hard reality that there is hard work ahead in the post-Mubarak era. Many civil servants apparently believe that it is more effective to demonstrate than to take the arduous path toward improving their situation.
Teachers, police officers, journalists and bank employees have demonstrated in the last two weeks. After achieving the goal of ending Mubarak's reign, they all want to vent the frustration they have felt in recent years and personally taste the fruits of the revolution.
'Everyone is allowed to express his opinion, but it would be better if the people would elect new employee representatives rather than striking,' said Maher, who fears the situation could result in further negative effects for the economy.
Tourism, a large part of the economy, is a concern. Currently, hotel occupancy is at most 8 per cent and no foreigner or Egyptian wants to invest large sums in the country.
And offers of aid from European countries currently are ineffective because it is unknown whether the minister in office today will be in office tomorrow or whether he might even be in jail.
A demonstration on Friday was in a small way a festivity marking a month of revolution. The main goal of this and other planned demonstrations is to put pressure on the military council that has been in charge since Mubarak was ousted.
'We have laid out our demands to the military, but they aren't listening and just say 'god willing.' That's not enough for us,' said Maher.
The military council, which received Maher and the other protest coordinators immediately after Mubarak left, offered to hold another meeting in the coming week after the youth movement and the Muslim Brotherhood announced the large demonstration held on Friday.
The protest movement is not yet in complete agreement on how the reform schedule should look. The first small constitutional reform is expected to be presented on Saturday.
The military would like elections to take place as soon as possible, but the youth movement fears that the Muslim Brotherhood, which is well organised, and Mubarak's National Democratic Party, which has not entirely broken up, would profit the most from this.
In order to allow time for the youth movement to organize, the movement has proposed a new president be elected in autumn. Lacking a newly elected parliament, he would be sworn before a constitutional court. Parliamentary elections would take place in one year.
But there is still widespread mistrust. Many Egyptians now are obtaining voting cards for the first time. Although it has been announced that in the future everyone will be allowed to vote using their personal identification card, some Egyptians think this declaration could be revoked.
'Who knows, perhaps it is a trick,' said a businessmen who took part in the demonstrations against Mubarak. But he isn't going to Tahrir Square any longer because he wants normality to return. 'Let's get back to work,' he declared.
Tweet
Pope Shenouda Article