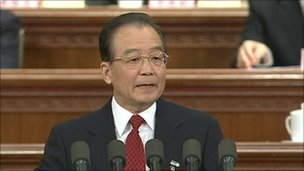 Mr Wen has been addressing about 3,000 delegates to open the National People's Congress in the Great Hall of the People in Beijing.
He says the government aims to keep inflation to within 4% and hit economic growth of 8%.
Mr Wen accepted that uneven economic development was a "serious problem".
The focus on social stability was echoed in an editorial in the Communist Party-run Beijing Daily that coincided with the opening of the Congress and which warned against any Middle East-inspired pro-democracy protests.
The speech is the most important of the year delivered by a Chinese politician, correspondents say, similar in status to the State of the Union address in the US.
"Recently, prices have risen fairly quickly and inflation expectations have increased," Mr Wen says.
"This problem concerns the people's well-being, bears on overall interests and affects social stability. We must, therefore, make it our top priority in macroeconomic control to keep overall price levels stable."
Inflation in China is at 4.9%, and has continued to accelerate despite three recent interest rate hikes. Analysts say it has yet to peak.
Rising prices are a concern because poor families spend up to half their incomes on food.
This year's National People's Congress, which meets for 10 days, is to approve China's five-year plan for 2011-2015.
The plan, the country's 12th since the Communist Party took power in 1949, aims to create more sustainable growth and even out growing disparities in wealth between rich and poor.
'Tranquil and orderly'
Domestic demand would be stimulated, Mr Wen said, with subsidies to farmers and the urban poor increased.
"Expanding domestic demand is a long-term strategic principle and basic standpoint of China's economic development as well as a fundamental means and an internal requirement for promoting balanced economic development," Mr Wen said.
The government would "firmly curb the excessively rapid rise of housing prices in some cities".
China's economy has become the world's second largest after several decades of rapid growth. But the success has come at the cost of polluted skies and waterways across much of the country.
Much of that growth has been driven by exports and large infrastructure projects, but there are concerns that the economy could falter unless it changes course.
"We must make improving the people's lives a pivot linking reform, development and stability... and make sure people are content with their lives and jobs, society is tranquil and orderly and the country enjoys long-term peace and stability," Mr Wen said.
He made no mention of the unrest in the Middle East, but the Beijing Daily editorial said that "stability is a blessing and chaos is a calamity".
Recent anonymous calls from a US-based website for pro-democracy protests in Chinese cities have been smothered by police.
"Those people intent on concocting and finding Middle East-style news in China will find their plans come to nothing," Beijing Daily said.
There are tens of thousands of protests across China every year, but most are over local grievances, especially land confiscated for development projects.
Despite the booming economic growth there are millions who feel shut out, angry at official corruption, at inequalities that are rising and at land grabs, says the BBC's Damian Grammaticas in Beijing.
That is why the government is so concerned about the possibilities for unrest, he says.
Tweet
Pope Shenouda Article