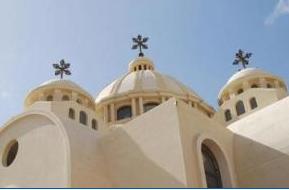 CAIRO - Two men were killed during clashes in Egypt, which also saw Muslims set fire to a church in the village of Sol, south of Cairo, a security official said on Saturday.

Two people were killed, and the Shahedain church set on fire in clashes between two families," the official told the MENA news agency. The violence was triggered by a feud between the families, which disapproved of a romantic relationship between a Christian man and a Muslim woman in the province of Helwan. It culminated in fighting on Friday in which both of the couples' fathers were killed, the official said. After the funeral for the woman's father, a group of Muslims headed to the village church and set it on fire. The army, which has been maintaining security in Egypt since police disappeared during anti-regime protests last month, managed to put the fire out and restore calm to the area, the official said. Romantic relationships between Muslim and Christians are taboo in Egypt, and marriage between a Christian man and a Muslim woman is illegal unless the man converts to Islam. Copts make up about 10 per cent of Egypt's 80-million population.