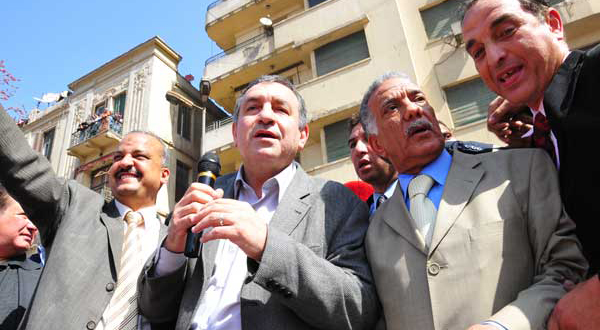 CAIRO: Thousands of protestors flocked to Tahrir square on Friday to celebrate the resignation of former Prime Minister Ahmed Shafiq and listen to the speech of the new PM Essam Sharaf.

Following Friday prayers Sharaf told jubilant protesters in Tahrir Square that he drew his legitimacy from the people.
"I was appointed by the Supreme Council of the Armed Forces, but I came here to draw my legitimacy from you," said Sharaf.
"The fact that Sharaf came to Tahrir today shows that he belongs to the revolution and expresses his loyalty to it," Sameh Khafaga, scholar and imam at the Ministry of Religious Endowments told Daily News Egypt.
Sharaf said: "My mission requires a lot of persistence and courage, and I am drawing this from you.
"Your demands are my duty and when I cannot meet them I will be here [among the protesters] not here [on the podium]," Sharaf told thousands in Tahrir.
The crowd chanted for the dismantling of the notorious state security services.
“I pray for a free Egypt,” he said. "I hope that one day opinions would be heard from outside the prison cells and that the security of the citizens would be the main priority."
"You did a great thing; rebuilding Egypt is even greater," he added.
Appointed on Thursday, Sharaf was yet to officially take his service oath. He was assigned to form a new government after former PM Ahmed Shafiq resigned.
Demonstrators asked Sharaf to recite the oath in front of them saying that the people are the ones who chose him and gave him legitimacy not the army, but he refused to do so.
"I salute the souls of the martyrs and those injured [during the revolution] and we all remember their pain. May God bless them and bless everybody who contributed to the success of this revolution," Sharaf said in his speech.
"Finally, let’s observe a minute of silence for the souls of our martyrs,” he said before protesters carried him on their shoulders as he left Tahrir.
Prominent member of the Muslim Brotherhood and former MP Mohamed El-Beltagi gave a speech to the protestors in Tahrir following Sharaf’s.
"The people are the ones who forced Shafiq to resign after the army was insisting on keeping him in the transitional government," El-Beltagi told demonstrators.
The coalition of the youth of the revolution had listed Sharaf's name in their suggestions for the cabinet earlier this week based on his good reputation and his participation in the revolution.
Sharaf has reportedly led a number of Cairo University professors that protested in Tahrir Square calling on former president Hosni Mubarak to step down.
"Sharaf is a very respectable man, however this government is on probation until it proves itself to the people," El-Beltagi added.
El-Beltagi said the people would give the government two weeks to execute their demands, if it fails the people will start having mass protests again.
El-Beltagi asserted that the revolution wasn't over.
The demands include the dismissal of governors and municipal councils, the release of all the political detainees, the dismantling of the state security apparatus and the prosecution of all officials responsible for the killing of protesters during the demonstrations.
The hundreds of protestors who have been staging a sit-in in Tahrir Square since Saturday disagreed on whether they should go home to give a chance to the new government to execute the people's demands or continue their sit in.
However, they all agreed that despite their respect and trust in Sharaf, he still remains under probation.
Abdel Salam Syam, a 60-year-old former driver, said, "I'm staying here until the State Security apparatus is dismantled."
"I have faith in the new Prime Minister, but I will still remain here until our demands are heeded," Syam added.
Khaled Abdel Kerim, assistant director, said, "Sharaf didn't present a program of what he's going to achieve exactly and didn't give us a timetable for executing our demands."
"When he does that, we will leave and give him an opportunity to follow through with his promise," Abdel Kerim added.
However other protestors including Mamdouh Fahmy, a 50-year-old father of two, said it's more productive to leave and give a chance to the new government to show what it's capable of.
"I have faith in Sharaf," Fahmy told DNE, "But if he doesn't follow through with his promises to the people, I will come to Tahrir again with my sons."
Other protestors voiced different demands and expectations, making Sharaf's task more difficult.
Ahmed Diraz, an English language teacher said, "The new prime minister came from the revolutions' womb but that doesn't mean he is flawless."
While Abdel Monem Abdullah, a farmer, said that Sharaf needed to implement late president Gamal Abdel Nasser's policy of distributing land on the farmers instead of corrupt businessmen.
On the other hand Mohamed Tolba, bus driver, demanded that the health insurance plans be improved and last for life.
The Kefaya Movement for Change and the Youth for Freedom and Justice and the April 6 Youth Movements agreed that they would give the new government a chance while holding mass protests in Tahrir every Friday to reassert the people's demands.
They had initially called for an open sit-in in Tahrir Square starting Friday until Shafiq and his government resigned.
"We will go home today and call off the sit-in, but we will hold protests every Friday," Mohamed Adel, spokesperson of the April 6 Youth Movement, told DNE.
"We will hold a million man march every Friday to maintain and protect the revolution's principles while repeating our demands that have yet to be executed," Karima Al Hefnawy, prominent member of Kefaya opposition movement and the National Association for Change told Daily News Egypt.
Tweet
Pope Shenouda Article