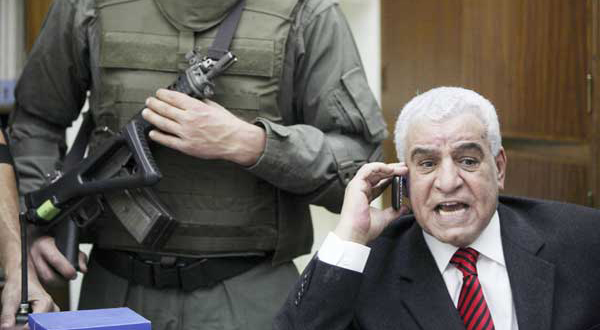 CAIRO: Egypt's top archaeologist, Zahi Hawass, warned that the country's antiquity sites were being looted by criminals amid the country's political upheaval as he announced he would no longer serve in his ministerial post in the government.

Hawass was quoted in the Friday editions of Cairo's dailies as saying he would not participate in the new government to be led by prime minister designate Essam Sharaf. Hawass, the longtime head of Egypt's antiquities office, was elevated to Cabinet-level antiquities minister on Jan. 31, when ousted President Hosni Mubarak named a new government led by longtime friend Ahmed Shafiq.
Shafiq resigned Thursday amid calls by protesters for his removal, and Sharaf has been tasked with naming a new government.
Hawass said he was no longer able to protect the country's antiquities because of what he called the absence of police protection and because he was the victim of a campaign against him by senior officials at his ministry.
Egypt's antiquities, he warned, were in "grave danger" from criminals. He called on the youth groups behind the 18-day uprising that forced Mubarak to step down Feb. 11 to help protect antiquity sites.
"Since Mubarak's resignation, looting has increased all over the country, and our antiquities are in grave danger from criminals trying to take advantage of the current situation," he wrote on his website.
Repeated attempts by The Associated Press to reach Hawass have failed.
On his website, Hawass listed some two dozen archaeology sites that have been raided by thieves since Mubarak's ouster. The sites include the warehouse used by archaeologists from New York's Metropolitan Museum of Art at Dahshour, a pyramids site on the outskirts of Cairo. Hawass also said illegal construction has taken place on antiquity sites.
The list includes ancient Egyptian tombs, Islamic sites and warehouses and are spread across much of the country from the outskirts of Cairo, the Sinai Peninsula and the southernmost city of Aswan.
The looting is part of a crime wave that has gripped Egypt since Jan. 28, when the police mysteriously disappeared from most of the country following deadly clashes with the anti-government protesters. The army was called out to restore order, but it has been unable to fully take on a policing role.
The police have yet to fully retake the streets, leaving a security vacuum in which criminals, including several thousand inmates who escaped prisons, are operating with impunity in parts of the country. The police force is widely hated for years of abuse against Egyptians and because of its brutal crackdown on protesters. Only about 50 percent of the police force is thought to have returned to work and there are reports that hundreds of officers want to quit.
Archaeology sites have chronically been a soft target for thieves because of their isolated location and the relative ease with which lowly paid guards can be bribed to look the other way.
"The situation looks very difficult today and we are trying our best to ensure the police and army restore full protection to the cultural heritage of the country," Hawass said on his website.
Hawass has for more than a decade been the international face of Egypt's archaeology, with his trademark "Indiana Jones" hat turning him into an instantly recognizable global icon. Hawass, however, has been the target of a recent series of heavily publicized protests by archaeology graduates who accused him of corruption and seeking publicity for himself.
He has been accused of being too close to Mubarak and his family, along with former culture minister Farouq Hosni, himself a protege of the Mubaraks who had served in the Cabinet for 25 years until he was left out from the Shafiq's government.
The Metropolitan Museum of Art joined Hawass in voicing concern over the looting.
"The Met and the entire museum community worldwide are increasingly concerned about what appear to be ongoing, grievous security breaches at Egypt's historic sites and archaeological digs," the museum's director, Thomas P. Campbell, said in a statement Thursday.
"The world cannot sit by and permit unchecked anarchy to jeopardize the cultural heritage of one of the world's oldest, greatest, and most inspiring civilizations. We echo the voices of all concerned citizens of the globe in imploring Egypt's new government authorities ... to protect its precious past. Action needs to be taken immediately."
Tweet
Pope Shenouda Article