One thousand turn out to Support Ahmed Shafiq 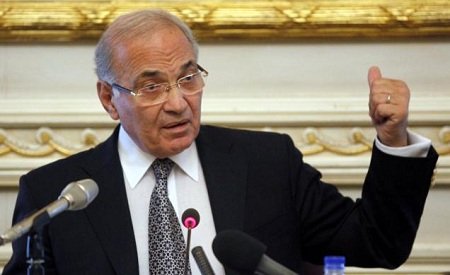 HELWAN, Egypt: Inside the gated compound of Katameya Heights, where ex- Prime Minister Ahmed Shafiq lives, around 1,000 people gathered to express their gratitude and support for him.

Chanting “We love you Shafiq” and “Shafiq for president,” the supporters, also residents of the upscale Katameya Heights and nearby compounds, were vehement in their assertion that the protesters in Tahrir do not represent them.
“There are lots of us here who didn’t even want Shafiq for prime minister,” says Aghraid Amin, a marketing manager at NGO Misr El-Kheir. “But they came because they are incensed that the opinion of those in Tahrir is forced upon all of us. We don’t want a dictatorship from Tahrir. Where is the democracy?”
A microphone went around and Shafiq listened to supporters expressing their opinion for over an hour, asking him for everything from starting a political party to running for president.
“The people in Tahrir are louder than us,” screamed one protestor, holding up a sign saying ‘Egypt is not just Tahrir.’ “But they don’t represent us all,” she said.
Dressed in a woolen vest, Shafiq handed her an apple juice from those being handed out: “I thank you for coming and for lifting my head up high,” he said, as he accepted flowers from supporters.
In response to those who asked him to start collecting signatures to form a political party, Shafiq refused to elaborate.
“There is no way I will be using this day to benefit politically. It's not about Tahrir or not Tahrir. Egypt is one. What the majority wants should happen. I have relatives in Tahrir. Egypt now is about freedom of speech.”
After an hour of listening to people’s demands, Shafiq headed home.
Standing next to a parked car, Sayed Abdel-ba’y, a 42-year-old driver, told Daily News Egypt: “The people here are the elite of Egypt. But even so, I’m with them now. I was in Tahrir, but over the past 10 days I stopped supporting the demands. Shafiq is a good person and we should have given him a chance.”
Tweet
Pope Shenouda Article