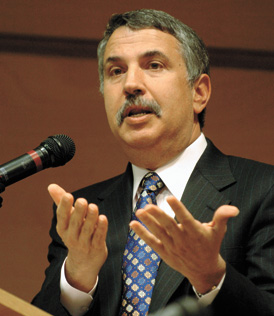 Future historians will long puzzle over how the self-immolation of a Tunisian street vendor, Mohamed Bouazizi, in protest over the confiscation of his fruit stand, managed to trigger popular uprisings across the Arab/Muslim world. We know the big causes — tyranny, rising food prices, youth unemployment and social media. But since being in Egypt, I’ve been putting together my own back-of-the-envelope guess list of what I’d call the “not-so-obvious forces” that fed this mass revolt. Here it is:

THE OBAMA FACTOR Americans have never fully appreciated what a radical thing we did — in the eyes of the rest of the world — in electing an African-American with the middle name Hussein as president. I’m convinced that listening to Obama’s 2009 Cairo speech — not the words, but the man — were more than a few young Arabs who were saying to themselves: “Hmmm, let’s see. He’s young. I’m young. He’s dark-skinned. I’m dark-skinned. His middle name is Hussein. My name is Hussein. His grandfather is a Muslim. My grandfather is a Muslim. He is president of the United States. And I’m an unemployed young Arab with no vote and no voice in my future.” I’d put that in my mix of forces fueling these revolts.
GOOGLE EARTH While Facebook has gotten all the face time in Egypt, Tunisia and Bahrain, don’t forget Google Earth, which began roiling Bahraini politics in 2006. A big issue in Bahrain, particularly among Shiite men who want to get married and build homes, is the unequal distribution of land. On Nov. 27, 2006, on the eve of parliamentary elections in Bahrain, The Washington Post ran this report from there: “Mahmood, who lives in a house with his parents, four siblings and their children, said he became even more frustrated when he looked up Bahrain on Google Earth and saw vast tracts of empty land, while tens of thousands of mainly poor Shiites were squashed together in small, dense areas. ‘We are 17 people crowded in one small house, like many people in the southern district,’ he said. ‘And you see on Google how many palaces there are and how the al-Khalifas [the Sunni ruling family] have the rest of the country to themselves.’ Bahraini activists have encouraged people to take a look at the country on Google Earth, and they have set up a special user group whose members have access to more than 40 images of royal palaces.”
ISRAEL The Arab TV network Al Jazeera has a big team covering Israel today. Here are some of the stories they have been beaming into the Arab world: Israel’s previous prime minister, Ehud Olmert, had to resign because he was accused of illicitly taking envelopes stuffed with money from a Jewish-American backer. An Israeli court recently convicted Israel’s former president Moshe Katsav on two counts of rape, based on accusations by former employees. And just a few weeks ago, Israel, at the last second, rescinded the appointment of Maj. Gen. Yoav Galant as the army’s new chief of staff after Israeli environmentalists spurred a government investigation that concluded General Galant had seized public land near his home. (You can see his house on Google Maps!) This surely got a few laughs in Egypt where land sales to fat cats and cronies of the regime that have resulted in huge overnight profits have been the talk of Cairo this past year. When you live right next to a country that is bringing to justice its top leaders for corruption and you live in a country where many of the top leaders are corrupt, well, you notice.
THE BEIJING OLYMPICS China and Egypt were both great civilizations subjected to imperialism and were both dirt poor back in the 1950s, with China even poorer than Egypt, Edward Goldberg, who teaches business strategy, wrote in The Globalist. But, today, China has built the world’s second-largest economy, and Egypt is still living on foreign aid. What do you think young Egyptians thought when they watched the dazzling opening ceremony of the 2008 Beijing Olympics? China’s Olympics were another wake-up call — “in a way that America or the West could never be” — telling young Egyptians that something was very wrong with their country, argued Goldberg.
THE FAYYAD FACTOR Palestinian Prime Minister Salam Fayyad introduced a new form of government in the Arab world in the last three years, something I’ve dubbed “Fayyadism.” It said: judge me on my performance, on how I deliver government services and collect the garbage and create jobs — not simply on how I “resist” the West or Israel. Every Arab could relate to this. Chinese had to give up freedom but got economic growth and decent government in return. Arabs had to give up freedom and got the Arab-Israeli conflict and unemployment in return.
Add it all up and what does it say? It says you have a very powerful convergence of forces driving a broad movement for change. It says we’re just at the start of something huge. And it says that if we don’t have a more serious energy policy, the difference between a good day and bad day for America from here on will hinge on how the 86-year-old king of Saudi Arabia manages all this change.
____________________
The New York Times
Tweet
Pope Shenouda Article