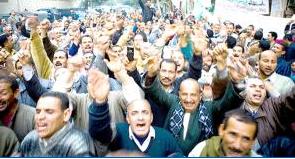 CAIRO - A heated debate about the post-revolution roadmap in Egypt has erupted. Ordinary citizens are jostling and shoving to climb on the podium and voice their visions and suggestions.

Supporting the birth of a new era in Egypt after the uprising on January 25, influential figures of the intelligentsia are joining in.
It is no surprise that ordinary citizens, represented by the working class and Government employees, want an all-out war against corruption and its masterminds under Mubarak's regime.
The nation is also calling for investigating the fortune amassed by the former president and his family over 30 years in power. When talking to the press, an employee insisted: “A post-revolution society in Egypt will only grow healthy and strong when the corrupt oligarchy of the former regime is forced to return our money and property.” Masoud Ibrahim added: “At a time when we were struggling to find the next meal for our children, they were stashing billions of US dollars away.”
Ibrahim added that he was one of the strikers who camped outside the People's Assembly last year to call for a wage increase. “The new society should guarantee social justice and equality,” he urged.
Political activists and writers are offering categorically different versions of what the post-revolution Egyptian society should look like. Mohamed Gamal el-Zayat, the Director of the National Centre for Middle East Studies, said that the revolution should lead to the restructuring of the political establishment.
He thought that the Supreme Council of the Armed Forces was steering the nation into this direction, basing his view on SCAF's determination to amend the Constitution.
“The Armed Forces have also pledged to revoke the Emergency Law,” el-Zayat commented. “They are keen to accomplish constitutional changes within six months before calling for parliamentary and presidential elections.”
Elaborating on his proposals for a new society, el-Zayat suggested that restrictions on the formation of political parties should be eliminated. He demanded that new parties should receive a 'birth certificate' the moment they notify the ad hoc committee.
“Elections should only take place after political activists enjoy smooth and unrestricted procedures when forming their parties.”
An Ain Shams University law professor, however, warned that the old political system should be razed to the ground before the foundations of a new one were built. Prof. Hussam Essa was worried also that members of the former regime were planning a counterattack on the strategies proposed to create a new political system.
Essa insisted that media people and journalists who had extolled the former regime should resign. “They made propaganda for the former regime, although it killed more than 300 young people during the revolution. It is unacceptable that they are still in their posts,” he protested.
Essa had also no intention to witness the emergence of another idolised ruler with unlimited power. “Enough with the ruler-cum-deity,” he said. The new constitutional amendments suggest the limitation of a presidential term to four years with two terms maximum.
Supporting calls by working class people and employees, the law professor said that the war against corruption could not be won unless the local municipalities were abolished, since they were the ultimate dens of corruption.
Tweet
Pope Shenouda Article