Ministers sworn in amid support from opposition 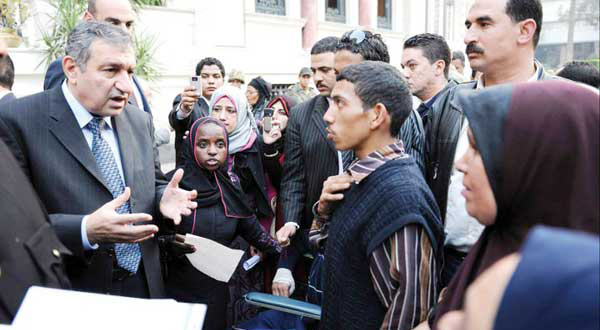 CAIRO: Ministers in the new Cabinet headed by Prime Minister Essam Sharaf were sworn in by the Supreme Council of the Armed Forces on Monday.

Some ministers of the previous government headed by former prime minister Ahmed Shafiq remained, and eight new ones were named: Nabil El-Araby as Foreign Minister, Mansour El-Essawy as Interior Minister, Councilor Mohamed Abdel Aziz Al Guindy as Minister of Justice, Ahmed Hassan Al Borey as Minister of Manpower, Emad Abou Ghazy as Minister of Culture, Ashraf Hatem as Minister of Health and Population, Mohamed Abdallah Ghorab as Minister of Petroleum and Ayman Farid Abou Hadid as Minister of Agriculture, according to state-TV.
Initially, Sharaf bundled antiquities and culture in one ministry under Emad Abou Ghazy. But on Monday the PM decided to separate them again in response to employees in the antiquities authorities, who protested in front of the Cabinet headquarters. They called for independence of the Ministry of Antiquities to preserve Egypt’s treasures.
The Minister of Antiquities is yet to be announced.
Opposition groups agreed to give the new government a chance to prove itself under Sharaf’s leadership even though it includes figures from the former regime.
Former MP Mohamed El-Beltagi of the Muslim Brotherhood told Daily News Egypt, “We will give the government a chance and see whether its performance will improve and differ under the leadership of Sharaf.”
“What’s more important than the government’s ministers’ is the government’s program and whether it heeds to the revolution’s demands,” El-Beltagi added.
Karima Al-Hifnawy, leading member of the Kefaya Movement for Change and the National Association for Change, Abdel Rahman Samir, member of the coalition of the Youth of the revolution and leading member of the campaign supporting ElBaradei, and Rifaat Al-Saeid, head of Tagammu Party, agreed with El-Beltagi.
“They might not be the best ministers’ or the most competent, but they could have a strong and positive political program,” Al-Saied told DNE.
“We want the new government to announce its program and make its objectives and priorities clear to the public,” Al-Saeid added.
“If Sharaf is under pressure to keep these ministers in the cabinet, then the least he can do is guarantee that these ministers will serve the people’s best interests and won’t work against them,” Samir told DNE, “especially the Minister of Electricity Hassan Younis, State Minister for Military Production Sayed Mishaal, Minister of Transport Atef Abdel Hamid and Minister of Planning and International Cooperation Faiza Aboul Naga.”
“There are still many ministers remaining in the government despite being prominent figures from the former regime and being despised by the people including Aboul Naga, Younis and Minister of State for Environmental Affairs Maged George,” Mohamed Adel, a spokesman for April 6 Youth Movement, told DNE.
“However, Sharaf promised (the movement) that these ministers’ performances will improve under his leadership and they will serve the people’s best interests,” Adel said.
“Sharaf added that he will resign if he fails to do so,” Adel added.
Adel, Hifnawy and Khaled El-Sayed, member of the coalition of the youth of the revolution and prominent member of Youth for Justice and Freedom Movement, agreed that if the government failed to serve the people, they will take to the streets again and call for mass protests to change the ministers affiliated with ousted president Hosni Mubarak’s regime.
However Ayman Nour, head of Al Ghad Party, said that this cabinet seemed promising and “much better” than the previous government except for the petroleum minister, Ghorab.
“This cabinet includes names that have the approval and respect from the people including the Minister of Interior (El-Essawy) and Sharaf,” Nour told DNE.
“We have every intention to cooperate with this new government in the coming period to achieve the reform we need for our country,” Nour said.
Amr El-Chobaki, senior researcher at Al-Ahram Center for Political and Strategic studies, agreed saying, “This government is good enough for a transitional government except for Mishaal.”
However Nabil Abdel Fattah, a political analyst from Al-Ahram Center for Strategic and Political Studies disagreed. “The choices of the new cabinet reflect an old political view affiliated with Mubarak’s regime which has supposedly been overcome by Egypt’s revolution.”
“Ministers are supposed to be known for their integrity and honor,” Abdel Fattah told DNE. “These are basic standards known to the world, but many ministers from the current government were part of an extremely corrupt regime.”
“Change is inevitable,” Abdel Fattah added.
The cabinet posted a poll on its Facebook page calling for the people to voice their opinions on the new cabinet.
Over 5,500 people posted their opinions. Most users objected on mMinisters affiliated with the Mubarak regime including Younes, Mishaal, George and Aboul Naga.
Some accused Mishaal of forging the previous parliamentary elections in his favor against outspoken journalist and former MP Mostafa Bakry to win a seat in Helwan district.
One user addressed Sharaf saying, “You know for a fact that the people can’t stand to see anyone from the previous regime in the government.”
“And it’s impossible that you couldn’t find any competent and honorable figure in Egypt instead of these old faces from the former corrupt regime,” he added.
Shafiq’s former government was under fire for including many prominent figures from the former regime, including the prime minister.
Shafiq resigned on Thursday and was replaced by Sharaf, sparking celebrations among protesters who demand a purge of the remnants of Mubarak's regime.
Sharaf gave a speech to protesters in Tahrir Square on Friday vowing to heed their demands.
Tweet
Pope Shenouda Article