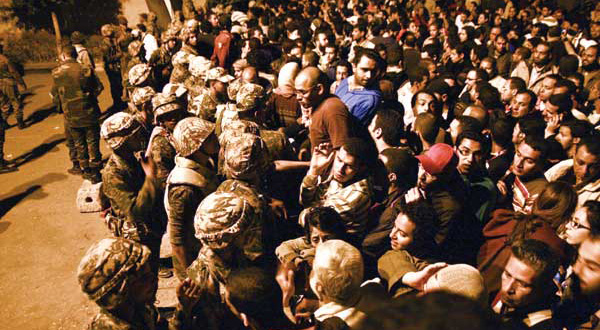 CAIRO: The military prosecution released on Monday 27 protesters who were detained by the army on Sunday following clashes outside the state security building in Lazoghly near downtown Cairo.

"The protesters were interrogated by military prosecution and then released afterwards," said lawyer and human rights activist Ramy Raouf.
Some of the protesters who gathered in Lazoghly were trying to break through barricades set up by the army leading the army to fire shots in the air to disperse the crowds and detain 27 protesters.
A wave of anger against Egypt's most oppressive security apparatus started in Alexandria when people saw flames erupting from the State Security building in Al-Fara'na district. Crowds of protesters as well as army forces stormed the building only to find thousands of documents burnt and shredded.
Similar protests occurred in Sixth of October, Behaira, and Zagazig governorates where crowds entered State Security headquarters or surrounded it waiting for prosecutors to arrive and inspect the buildings for documents.
Tweet
Pope Shenouda Article