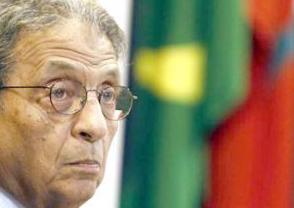 CAIRO - Outgoing Arab League chief Amr Moussa said late on Tuesday he wanted Egyptian presidential elections to come before people vote for a new parliament and said he would run for president for only one term, Reuters reported Wednesday.

Moussa, an Egyptian who was secretary-general of the Arab League for a decade, who is a front runner in the race, said in February he intended to run for the presidency but would make a final decision once constitutional amendments were finalised.
"In my opinion the presidential elections should come before the parliamentary one as the parliament election needs to have strong parties," the 74-year-old told a crowd of youth at a cultural centre late on Tuesday.
President Hosni Mubarak's 30-year rule that banned political assemblies and harassed opponents has left Egypt's political parties fractured, with little organisation and few policies.
An online poll on the website of Al-Ahram daily newspaper in the beginning of March showed Moussa with a big lead over Mohamed ElBaradei, the Nobel prize-winning former head of the International Atomic Energy Agency.
The military rulers, who run the country after mass protests forced Mubarak out of office on February 11, said it planned to transfer power to civilian rule by holding a parliamentary vote then a presidential one within six months.
Critics say this is too quick for parties to get established and gives an advantage to remnants of Mubarak's National Democratic Party and the Islamist Muslim Brotherhood, the country's best organised opposition group.
Constitutional reforms, to be finalised by a referendum on on March 19, will stop any president from serving more than two consecutive four-year terms.
"Egypt is on the right track and the revolution could not be defeated but there are obstacles," Moussa said, adding: "There should be a cancellation of emergency law and we should all fight corruption".
He defended the right of the Brotherhood to political participation.
"We have to move away the principle of rejecting the Brotherhood or any other group ... leave it to the people to choose who they want," said Moussa.
Tweet
Pope Shenouda Article