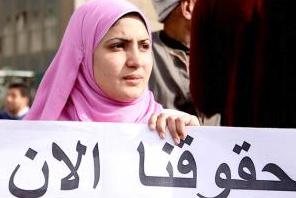 CAIRO - A Million Woman March in Cairo drew a few hundred people Tuesday and a significant group of anti-feminist demonstrators.

The march on International Women's Day aimed to celebrate the role played by women in the protests that brought down President Hosni Mubarak and to call for "fair and equal opportunity for all Egyptian citizens - beyond gender, religion or class," CNN reported. Marchers gathered in Tahrir Square, site of the major anti-government demonstrations. There were men among the pro-feminist marchers, but others yelled at the demonstrators. CNN estimated the total attendance at about 1,000. "Men are men and women are women and that will never change and go home, that's where you belong," was a chant hurled at the marchers. Organizers used Facebook to spread word of the march ahead of time. "The barrier of patriarchal control is one that Egyptians have managed to break since day one of the revolution," they said. Women were very visible among demonstrators who toppled Mubarak last month. "Egyptian women have resisted unjust control and fought to bring down the patriarchal regime and liberate themselves and their country," activists said. The Egyptian Center for Women's Rights said it has been inundated recently with requests for help from young women interested in getting involved in politics.