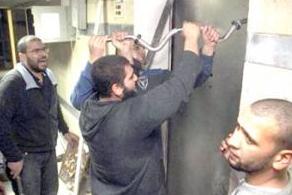 CAIRO – New evidence of spying and torture by an Egyptian security agency has piled pressure on military rulers to abolish a hated and feared symbol of Hosni Mubarak's era. that appeared to be designed to put detainees in stress positions and testing a stun gun disguised as a mobile phone

News that state security officers were shredding and burning documents triggered break-ins by activists concerned that evidence of human rights abuses was being destroyed, as well as documents that might incriminate former officials. State security accused activists of starting the fires.The activists entered 11 state security buildings around the country, illustrating how little fear Egyptians now had of an agency that came into existence before Mubarak took office in 1981. The military has asked activists to return the documents. The Supreme Council of the Armed Forces said on Monday it was guarding state security buildings, a statement understood to mean the security agency was now under full military control. Egypt's Prosecutor General ordered the detention of 47 state security officers accused of burning documents. The state-owned Al-Ahram newspaper declared the death of the agency altogether. "The state of state security falls," it said in a banner headline on Monday. Hassan Nafaa, a political scientist and leading member of the reform movement, said the military was now in full control of state security. It would be difficult for the military to ignore state security's attempts to destroy paperwork and the documents exposed by activists in recent days, he said. "The Supreme Council of the Armed Forces acknowledges that this apparatus was a danger to society and was not working in the interests of society," he said. "I have no hope in the idea of restructuring this apparatus. What is required is its entire dissolution and the establishment of a new one with a new ideology." The country's new Interior Minister has said state security's role should be limited to fighting terrorism and not interfering in Egyptians' lives. He has yet to say whether the agency will be dissolved. Reformists say they will continue to press that demand. They are still awaiting justice for Khaled Saeed, an online activist killed last year and whose death is seen as a milestone on the road to the uprising against Mubarak. Two state security policemen are on trial in the case. "The protests will never end until all of the people's demands are met. Closing down state security is at the forefront of them and I don't see why this should not be done and quickly," said 23-year-old activist Islam Godah. "This establishment has done nothing but torture, harassment and abuse. I can't find anything good it did for the people and I can't find anything wrong in closing it down."