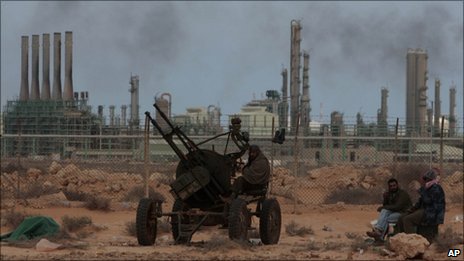 Rebels forces opposed to Libyan leader Colonel Gaddafi have been forced out of the northern oil town of Ras Lanuf, reports say.
Rebel leaders told reporters that their fighters had been driven 20km (12 miles) from the outskirts of Ras Lanuf.
Government forces now control the town and its oil refinery.
The Arab League is due to hold an emergency meeting in Cairo on Saturday to discuss supporting the imposition of a no-fly zone over Libya.
In comments made ahead of the meeting, the League's Secretary General, Amr Mussa, backed the creation of a no-fly zone and said he wanted the pan-Arab organisation to play a role in implementing it.
"The United Nations, the Arab League, the African Union, the Europeans - everyone should participate," Mr Mussa told German weekly Der Spiegel.
On Friday, EU leaders in Brussels stopped short of supporting the British and French initiative, saying instead that they would "examine all necessary options" to protect civilians.
War planes
General Abdel-Fattah Younis, who was the country's interior minister before he joined the rebels, told the Associated Press news agency that his forces would make a comeback by Sunday "at the latest".
There has been intense fighting for Ras Lanuf, 600km east of Tripoli, for several days.
Government warplanes bombed the town's oil refinery and a rebel checkpoint, and there were reports of fierce battles in the town.
Earlier this week, pro-Gaddafi forces re-took the town of Zawiya, 30 miles (48km) west of Tripoli.
Foreign journalists allowed by the Libyan government into the town reported scenes of devastation, with virtually every building around the city's main square flattened or damaged by heavy fighting.
Reuters also reported strikes at Uqaylah and another bombing further east near Brega.
On Friday, the US and the EU repeated their calls for Col Gaddafi to step down.
Tweet
Pope Shenouda Article