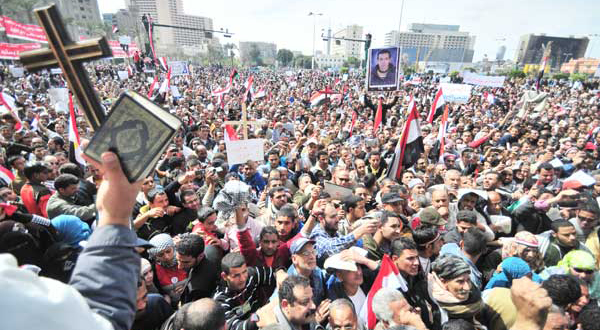 CAIRO: Thousands of protesters flocked to Tahrir Square on Friday calling for national unity and reiterating demands for reform.

However, the square was not closed off to traffic for the first time since demonstrations started — resulting in the ouster of president Hosni Mubarak on Feb.11 — as cars struggled to flow amid protesters.
Protesters held crosses and copies of the Quran side-by-side and chanted, "Muslims and Christians are one hand."
"Members of the National Democratic Party and State Security are the ones responsible for burning the church in Etfeeh," father Filopateer of Giza diocese told the crowd in Tahrir. "We have their names and they are [being investigated] by the prosecutor general as we speak."
Filopateer said he came to Tahrir Square in an official visit with a Coptic delegation.
Earlier this week, a fight between members of a Muslim family — over an alleged romantic relationship between the daughter of one them and a Coptic man — left two dead, including the woman’s father. After the funeral, residents of Etfeeh village marched to the Al-Shahedayn (Two Martyrs) Church to protest the alleged relationship. They broke into the church and set it ablaze.
Ihab Al-Kharrat, a member of Filopateer's delegation, said "The martyrs who died on Jan. 25 and 28 were Muslims and Christians," Al-Kharrat said. "Our blood has been mixed together."
"That's why the Christians came here today to pray with [Muslims] on Friday and combat sectarian strife," Al-Kharrat said.
The protesters prayed together for the unity and safety of Egypt.
"We are one people, one dignity, one demand," he added.
Gamil Ahmed Allam, dean of an Islamic Studies Institute in Alexandria and Zagazig and a member of the Coalition of the Islamic Scholars in Mekka, also accused the former regime and State Security of burning down the church.
Allam called on the army to protect the lives of the Copts in Egypt and immediately release all the political detainees.
The people addressed Field Marshal Mohamed Hussein Tantawi chanting, "Egyptians' blood isn't cheap."
Army General Hassan El-Reweiny took the stage when people started chanting against the army. El-Reweiny held the Quran and the cross in one hand and chanted, "The crescent and the cross are one."
"We are all Egyptian whether we are Muslims or Christians," he said. He then led the protesters in singing the national anthem.
El-Reweiny denied that the reason behind the escalation of sectarian strife was the former regime.
"Etfeeh has 7,000 Christian residents," El-Reweiny said, "the problem was not sectarian, it was merely the issue of a boy and girl."
In another corner of Tahrir Square, Rawheyya Abdel Aal, 54, held the Egyptian flag and danced to national songs, while people cheered and applauded her.
"I'm here to celebrate the unity of Muslims and Christians," Abdel Aal told DNE.
Other protesters went to Tahrir Square to reiterate their demands including a new constitution, dismantling the State Security apparatus, the release of all political detainees and prosecuting those responsible for the death of the martyrs of the revolution.
Farid Abdel Hamid, 44, told DNE he won't return to his hometown in Kafr El-Sheikh until these demands are heeded.
Abdel Hamid and other protesters said that the army and thugs tore down their camps, beat them and forced them to leave Tahrir Square on Wednesday.
"But I came back again, I'm not leaving," he said.
"The army and thugs beat us and forced us inside the Egyptian museum and detained us there for nearly four hours," a protester, who preferred to remain anonymous, told DNE.
"The thugs and army attacked us with knives and swords on Wednesday," Gihan Abdel Aty, 45, told DNE.
Police were seen back in Tahrir Square talking to protesters as dozens chanted: "The people and the police are one hand."
"We've been back in Tahrir since [Thursday] and we’ve been warmly welcomed by the people," high ranking officer, Hassan Berdeissy, told DNE.
Tweet
Pope Shenouda Article