PM warns of a counter revolution 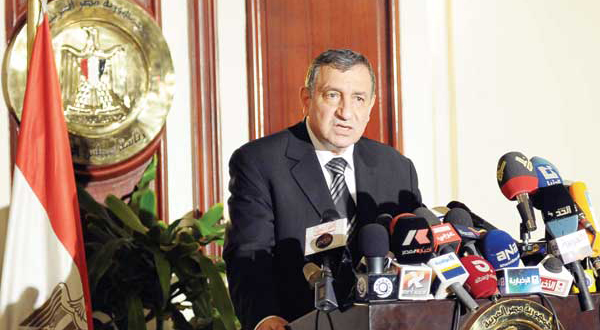 CAIRO: Prime Minister Essam Sharaf admitted Wednesday evening that there has been a “counter revolution” threatening the country.

In an interview with “Al-Ashera Masa’an” talk show broadcast on Dream 2 satellite channel, Sharaf said the government believes there has been a counter revolution behind the recent incidents leading to sectarian strife and chaos.
“Let’s pray we are wrong,” Sharaf told TV host Mona El-Shazly.
“The government accepts as true that what’s going on is organized and systematic. … Unfortunately, you can sense that there are people attempting to destroy the state’s structure,” he said.
Following a meeting with the ruling Supreme Council of the Armed Forces, Sharaf accredited a law that criminalizes threatening and intimidating citizens whose penalty could reach the death sentence if a murder is included.
Sharaf and a number of ministers discussed with the military rulers “developments in the country, specifically the acts that have hindered daily life, acts of thuggery, incitement, intimidation and tensions affecting national unity.”
In the first statement released by the caretaker cabinet, the government also “ordered the swift return of police forces, in their full capacity, back to the streets” and “urged citizens to cooperate with the police.”
“I hope the Egyptian people would show the police the respect they deserve,” Sharaf said on the talk show.
The statement further stressed the right of prosecutors and judges to inspect any place in which they suspect detainees were held.
The cabinet said a law would be imposed on anybody who attacked public establishments in general and police buildings in particular.
The country has been witnessing a state of security vacuum since the night of Jan. 28, dubbed the “Day of Rage,” following mass protests in Cairo and other governorates.
On that day, police dealt violently with protesters which led to clashes between the two sides that forced the security forces to step back.
According to Sharaf, “the government’s general adopted philosophy is to make Egypt a state of law.”
“Whatever violates the law must be decisively confronted,” he said.
The government said it will “firmly impose laws and legislations criminalizing any attacks on houses of worship and sanctity of religions.”
On Tuesday night, 13 people were killed and over 160 were injured in clashes between Muslims and Christians in the Moqattam, Qala’a and Sayeda Aisha areas.
The clashes that went on to early Wednesday morning started after hundreds of Copts protested the burning of a the Two Martyrs Church in Sol village, Etfeeh, Helwan last Friday.
Separately, attackers armed with knives and machetes waded into hundreds of pro-democracy activists striking in Tahrir Wednesday, requesting them to quit striking and evacuate the square.
Violent confrontations broke out between the two camps.
By early evening, the army restored order in Tahrir, dismantling tents pitched by protesters and detaining many of them.
“I would like to say to the initiators of this pure... revolution, it is time to protect [it],” Sharaf said.
At the end of the interview, Sharaf teared up when he mentioned he received two consecutive phone calls, one from an Egyptian in Saudi Arabia promising to pray for him with a group of pilgrims during Umrah and another from a Christian friend of his son’s saying he and his fiancé light a candle every day for him and the government.
Tweet
Pope Shenouda Article