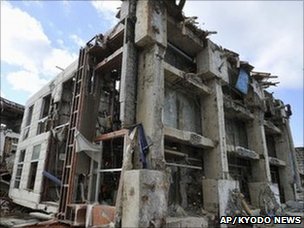 Workers are close to restoring power to cooling systems at a quake-hit Japanese nuclear power plant, officials say.
Workers hope to connect cables to four of the six reactors at the Fukushima Daiichi plant by the end of the day.
The earthquake and tsunami it triggered crippled the plant's cooling systems, and some radiation has leaked.
Food products from the Fukushima prefecture now have been banned from sale after radioactive contamination was found in milk and spinach.
Japanese authorities confirmed the presence of radioactive iodine in the products, tested between 16 and 18 March, and said it could be harmful to human health if ingested.
International nuclear experts at the IAEA say that, although radioactive iodine has a short half-life of about eight days, there is a short-term risk to human health if it is ingested, and it can cause damage to the thyroid.
Traces of radioactive iodine have also been found in tapwater in Tokyo and five other prefectures, officials said on Saturday.
The traces are within government safety limits, but usual tests show no iodine, the AP news agency reported.
Rising toll
The earthquake and tsunami which struck on 11 March are known to have killed more than 7,300 people, while 11,000 more remain missing.
The authorities have begun building temporary homes for some of the hundreds of thousands of people still sheltering at emergency evacuation centres.
Many survivors have been enduring freezing temperatures without water, electricity, fuel or enough food.
Japan has been shaken by scores of tremors since 11 March - one of magnitude 6.1 hit the Ibaraki area south of Fukushima on Saturday. There were no immediate reports of any damage.
At the stricken plant, firefighters have continued to spray water at the dangerously overheated fuel rods, in a desperate attempt to avert a meltdown.
Engineers hope that restoring power will allow them to restart pumps to continue the cooling process.
A nuclear safety agency official said on Saturday: "We are scheduled to restore electricity at number 1 and 2 [reactors] today.
"Reactors number 5 and 6 also will be powered today. They are scheduled to restore power to number 3 and 4 tomorrow [Sunday]."
Given the scale of the damage, it is not certain the cooling systems will work even if power is restored. Workers are also boring holes in roofs at the plant to prevent a potential gas explosion.
On Friday officials raised the alert level at the plant from four to five on a seven-point international scale of atomic incidents.
The crisis, previously rated as a local problem, is now regarded as having "wider consequences".
Radiation levels have risen in the capital Tokyo, 240km (150 miles) to the south, but officials say the amounts found are not harmful.
Meanwhile, reports that a young man had been found in a wrecked house eight days on from the quake have proved false, after it emerged that he had in fact returned to his ruined home from an evacuation centre.
Katsuharu Moriya, a man in his 20s, was found on Saturday by emergency workers in the city of Kesennuma, in Miyagi prefecture - one of the hardest-hit regions.
Millions of people have been affected by the 9.0-magnitude quake and tsunami; about 400,000 people are homeless.
'Too slow'
The government has now conceded it was too slow in dealing with the nuclear crisis.
Chief Cabinet Secretary Yukio Edano accepted that "in hindsight, we could have moved a little quicker in assessing the situation and co-ordinating all that information and provided it faster".
Prime Minister Naoto Kan has sought to form a crisis cabinet to tackle reconstruction, but the leader of Japan's conservative opposition rejected an offer to join a grand coalition.
Mr Kan said in a television address on Friday: "We will rebuild Japan from scratch. We must all share this resolve."
Tweet
Pope Shenouda Article