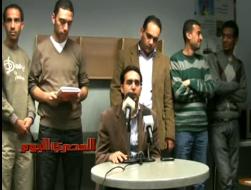 Revolution Youth Coalition rebuffs constitutional amendments, given current changes coincide with ones initially proposed by ousted president Hosni Mubarak. The coalition dubs changes as a "patchwork" of 1971 constitution which, according to coalition, is now null. The coalition demands an interim charter applicable over current power transition period and a presidential council - instead of a supposedly hastily-elected president based on a controversial, current constitution - which would run Egypt temporarily.