In key win for rebels, Gadhafi forces withdraw from Ajdabiya 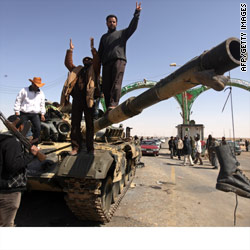 Ajdabiya, Libya (CNN) -- Aided by coalition airstrikes, Libyan opposition forces claimed victory Saturday over Moammar Gadhafi's forces in wresting control of a strategically located eastern city while a battle in the west raged as loyalist tanks resumed the shelling of Misrata.
Loyalist forces retreated Saturday after days of fierce fighting in Ajdabiya, where the opposition reveled in its key victory in the city considered a gateway to Libya's vast oil fields and a stopping point on route to the rebel stronghold of Benghazi.
Ajdabiya is now "100 percent" in opposition hands, said Shame Eldin Abu Almulla, spokesman for Libya's opposition interim council.
"As far as the military forces of Gadhafi, many of them have surrendered, others are retreating back and are being pursued towards Brega as of this minute," he said.
The Ajdabiya victory is viewed as a significant move forward for the Libyan opposition, which intends to take the fight all the way to the capital. It also served as evidence of the impact of coalition airstrikes.
Overnight, international fighter jets again bombed Libyan tanks that have been entrenched at the city's northern and western gates for days, opposition spokesman Jalal al-Gallal said.
At the northern entrance, damaged tanks lay strewn across the rolling desert. The buildings around the city entrances were riddled with bullet holes. Rebel troops combed the city's streets Saturday, hunting for any remaining Gadhafi loyalists, al-Gallal said.
A different story unfolded in the besieged city of Misrata, just two hours east of Tripoli, where some of the most intense fighting has taken place since protests erupted in Libya last month.
At least 20 people were wounded in Misrata Saturday, victims of snipers loyal to Gadhafi, a doctor at the main hospital told CNN. He said seven people were killed Friday and another 70 were wounded in the violence.
Gadhafi's tanks resumed shelling Misrata on Saturday, a witness told CNN. Opposition forces, armed only with light weapons, were trying to repel the attack and casualties were mounting, the witness said.
Coalition planes flew 164 sorties Friday and coalition leaders reported damage to Gadhafi's ground forces. But they warned, Gadhafi still retains the power to reinforce units.
The airstrikes provided cover for rebels to advance toward Ajdabiya and several of Gahdafi's tanks were taken out.
Coalition leaders maintained that their mission was enforcing a no-fly zone and protecting civilians.
"When we see regime forces attacking civilians, we will do everything we can to stop those attacks," said Gen. Carter Ham, commander of the U.S. Africa Command.
But Libyan government spokesman Ibrahim Mussa slammed the coalition attacks.
"This is immoral, illegal and it was not authorized by the (United Nations) Security Council," he told reporters in Tripoli.
Libyan state television reported March 15 that "Ajdabiya has been cleansed from mercenaries and terrorists connected to al Qaeda," and later said Gadhafi's forces were in control of the city.
Opposition leaders disputed that claim, saying government forces had only taken control of some of the city's entrances.
Outside the city, displaced residents who fled the violence filled campsites scattered across the harsh terrain.
"We were driving and the rounds were landing around us. Rockets were hitting our roof," Hussein Othman said. "We saw bodies in the street, but no one can bury them. Even the ambulances were getting shot at."
Families said they did not want to leave the area, clinging to hope of a rebel victory.
Ajdabiya is one of several Libyan cities and towns where coalition jets have pounded Gadhafi military targets in its goal to protect civilians.
Libyan state television reported Saturday that "airstrikes from the enemy" had hit military positions in Tarhunah, about 40 miles (66 kilometers) from the country's capital.
Friday, the government escorted international reporters to Tripoli suburbs to see collateral damage firsthand.
Gadhafi has been keen to put out the word on collateral damage from the coalition's airstrikes. Libyan health ministry official Khaled Omar told reporters Friday that 114 people had been killed during the coalition's campaign, but he did not specify whether they were civilians.
At a farm outside Tripoli, missile fragments lay scattered about a palm orchard and shrapnel had peppered walls of still-standing farm buildings. But reporters found no evidence of civilian deaths.
In Tripoli, CNN reporters are restricted to government-organized tours; Libyan authorities forbid independent movement by international journalists.
Along the way, the reporters saw evidence of other damage from coalition strikes, and signs of how Gadhafi's forces are fighting back.Two military bases that had been bombed were still smoldering Friday. Anti-aircraft guns were buried in bunkers along the roadside. Small missiles were hidden under trees.
NATO this weekend is expected to take over control of the U.N.-mandated no-fly zone from the United States and finalize procedures on protecting civilians.
Tweet
Pope Shenouda Article