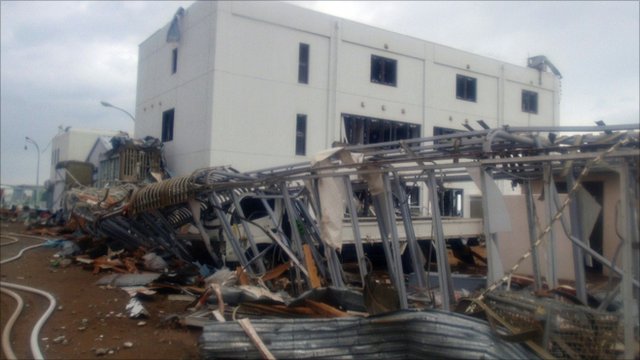 Levels of radioactive iodine in the sea near the tsunami-stricken Fukushima nuclear plant are 1,250 times higher than the safety limit, officials say.

The readings were taken about 300m (984ft) offshore. It is feared the radiation could be seeping into groundwater from one of the reactors.
But the radiation will no longer be a risk after eight days, officials say.
There are areas of radioactive water in four of the reactors at the plant, and two workers are in hospital.
The plant's operator says the core of one of the six reactors may have been damaged.
It has announced that fresh water rather than seawater will now be used to cool the damaged reactors, in the hope that this will be more effective.
Prime Minister Naoto Kan said the situation was "very unpredictable".
The official death toll from the 11 March earthquake and tsunami has passed 10,000, and more than 17,440 people are missing.
Hundreds of thousands of people have been made homeless; an estimated 250,000 people are living in emergency shelters. Food, water and fuel are in short supply.
The Japanese government has put the rebuilding cost at $309bn (£191.8bn).
Safety measures
The levels of radiation found in the sea near the plant were more than eight times higher than those found in the same area last week, the Japanese officials said.
A spokesman for Japan's Nuclear Safety Agency said the radioactivity level in the sea off the nuclear plant was "relatively high" but the impact on marine life would be minor.
"Generally speaking," spokesman Hidehiko Nishiyama told a news conference, "radioactive material released into the sea will spread due to tides, so you need much more for seaweed and sea life to absorb it."
Sea radioactive near Japan plant
He continued: "And, since [the iodine] has a half-life of eight days, by the time people eat the sea products its amount is likely to have diminished significantly."
The contamination probably came from both airborne radiation released from the reactors or tainted water that spilled into the sea, Mr Nishiyama said.
In a televised address on Friday, Prime Minister Kan said: "The current situation is still very unpredictable. We're working to stop the situation from worsening. We need to continue to be extremely vigilant."
He also thanked the workers, firefighters and Self-Defence Forces for "risking their lives" to try to cool the reactors at the Fukushima Daiichi plant.
Japan's chief cabinet secretary Yukio Edano has said a rigorous inquiry is under way to establish the cause of a leak at the plant, after tests showed water in the turbine halls of reactors 1 and 3 had radiation levels 10,000 times higher than normal.
Japan's Nuclear Safety Agency has reiterated its position that it believes the reactor may have been damaged but it is going no further than that, says the BBC's Mark Worthington in Tokyo.
The agency has denied any suggestion that the reactor core may have cracked, Kyodo news agency reports.
The two affected workers, who remain in hospital, had reportedly not been wearing the correct protective boots and had ignored a radiation alarm at the plant.
A revision of safety measures has been ordered.
The government has asked people still living within 20-30km (12-18 miles) of the nuclear facility to leave voluntarily. Until now, residents in the zone had been advised to stay indoors.
Food fears
Japan has banned shipments of foodstuffs grown in several prefectures around the damaged nuclear plant.
People in Fukushima prefecture have been told not to eat 11 types of green leafy vegetables because of contamination worries.
Importers of Japanese products are finding low levels of radiation in some food stuffs, however the amounts found do not pose a health hazard.
China, Singapore, Hong Kong, and other Asian importers have already placed bans on some imports of vegetables, seafood and milk products.
Australia, the European Union, the United States and Russia have followed suit.
The Fukushima plant is 250km north-east of the capital, Tokyo.
Radioactive iodine was detected in Tokyo's water supply earlier this week. Levels have since fallen, but remain high in other areas of northern Japan.
Tweet
Pope Shenouda Article