WikiLeak shows US unhappy with Baradei on ME issues 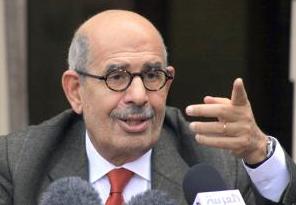 VIENNA - Washington's differences with Mohamed ElBaradei over his Middle East views and his handling of nuclear investigations in Iran and Syria persisted into the last months of his tenure as head of the International Atomic Energy Agency, according to a US diplomatic cable released late Friday on the WikiLeaks website.

The cable, written Jan. 13, 2009, indicates that tensions continued after the US government formally gave up its efforts to unseat ElBaradei. It also reveals ElBaradei's preoccupation with the Israeli-Palestinian conflict and his belief in the need for democratic change in the Middle East, long before he recently became a driver of Egypt's political reforms and a potential presidential candidate there. On the Middle East, ElBaradei, an Egyptian, "said the situation is terrible, Arab governments (i.e. Egypt and the Gulf states) lack credibility and there is a growing gap between rich and poor," said the cable, written by Gregory L. Schulte, then chief US delegate to the International Atomic Energy Agency. Arab governments "need to work on 'internal reform, not just foreign policy,'" Schulte cited ElBaradei as saying in a private meeting. Since his return to Egypt last year, ElBaradei has reinvigorated a youth movement that reached out to him as a leader in its calls for reform, seeing him as independent, untainted by state corruption and as a figure who represents international success. A prominent figure in the mass protests that forced out Hosni Mubarak, he appeals to educated and middle-class Egyptians, but lacks a wider popular following. He has said that as Egypt's president he would restore relations between Cairo and Tehran that were severed in 1979, and has dismissed the Middle East peace process as a "ridiculous joke" - both comments that do not sit well with Washington. ElBaradei already was outspoken while IAEA chief. Early in 2009, in the aftermath of three weeks of intense fighting between Israeli forces and Palestinian militants in Gaza, he canceled interviews with the BBC over its refusal to air an appeal for victims of the Gaza conflict, saying the decision violated "basic human decency." During his tenure the Egyptian-born diplomat, who shared the 2005 Nobel Peace Prize with his agency, was criticised by the US, and some other IAEA members for comments on Iran, Iraq or other nations under examination for possible violations of nonproliferation commitments. He was accused of straying from the strictly technical commentary he was mandated for to making politically tinged statements that sometimes clashed with Washington's interests. His independent streak led to attempts by Washington to have him removed from office. That push was abandoned just before ElBaradei won the Nobel Peace Prize and US officials publicly praised him as he left office last year. But the cable published Friday shows continued differences simmering outside public view. "Unfortunately, ElBaradei is likely to remain part of the problem, rather than solution, if he becomes increasingly unwilling toward the end of his term" to rein in his views on the Middle East and other issues that hew closer to positions held by developing countries than the US and its allies, wrote Schulte. Quoting ElBaradei as saying that the IAEA will "go through the motions" of trying to probe alleged secret nuclear work in Iran and Syria, the cable suggested the agency chief was remiss, adding he "seems poised to continue to place the onus on the US and others to 'solve' the Iran and Syria issues."