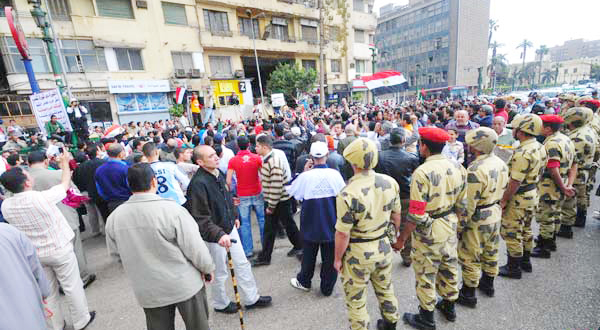 The bill awaits approval from the Supreme Council of the Armed Forces.
Meanwhile at the state television building in Maspero, hundreds of protesters gathered early Friday calling for the “cleansing of state media,” among them employees of state media.
Later on, producers and television reporters working for state media went to Tahrir to garner support from protesters there.
"Some of us haven't eaten for five days, we can't do this alone," one producer said. "We need your help."
They called on the protesters in Tahrir to join them next Sunday and Friday in mass protests calling for the resignation of State TV and Radio officials to rid state media of corruption.
By midday, the crowd swelled as around 400 protesters from Tahrir joined forces with more than a thousand Maspero protesters.
A smaller protest by Copts on the other side of the Maspero Corniche condemned an incident in Qena where a Coptic man had his ear cut off by “a group of extremists,” according to the state-run Al-Ahram, for allegedly having an illicit relationship with his tenant.
Earlier in the day, protesters congregating in Tahrir reiterated demands to prosecute all prominent figures affiliated with the former corrupt regime as well as the release of political detainees.
"We want to prosecute the former corrupt regime especially Gamal Mubarak and former Interior Minister Habib Al-Adly and Hosni Mubarak," Mahmoud Al-Sayed, 41, told Daily News Egypt.
Al-Adly has been in police custody since Feb. 17 and is being investigated for money laundering and for his involvement in the killing of protesters in the early day of a popular revolt that ousted former president Hosni Mubarak on Feb. 11.
"Prime Minister Essam Sharaf has yet to fulfill his promises to the people in Tahrir," Mohamed El-Gebaly, 45, said. "I have lost all faith in him."
Protesters condemned the draft law chanting, "We won't be afraid, we will keep coming to Tahrir." Protesters also addressed head of the ruling army council and Minister of Defense Field Marshall Hussein Tantawi, chanting, "Take your orders from Tahrir Square."
According to the draft law, those who organize protests or sit-ins that lead to obstructing work at state's institutions, public authorities or private and public workplaces, or obstruct the flow of traffic will be fined between LE 50,000 and LE 100,000 or face imprisonment.
Those who organize violent protests that involve the sabotage of production equipment, harm national unity or social peace, cause public disorder, damage or occupy public or private property will be imprisoned for no less than one year and fined between LE 100,000 and LE 500,000.
The law was criticized for going against many of the demands and principles of the January 25 Revolution.
"Where is the freedom they promised us," El-Gebaly said.
Protesters were scattered around the square to allow so as not to hinder traffic. Civilians were seen assisting army soldiers in controlling the crowds and organizing traffic. Police officers were visibly absent from the scene. Some protesters were seen taking pictures with army officials.
Eyewitnesses said a police officer had an altercation with one of the protestors, after which the police left Tahrir Square.
"One of the protesters insulted the policeman, but we made him leave the square," student in the faculty of commerce, Mahmoud Aly, told DNE.
At one corner of the square, around 30 Palestinian protesters married to Egyptian women demanded their children be granted Egyptian nationality.
"My children have to pay the university's tuition fees in foreign currency and they pay more than double what Egyptians pay because I'm Palestinian, but their mother is Egyptian," Salma Haleil said.
A 2004 law granting children of Egyptian mothers married to foreigners the right to Egyptian nationality, contains a provision that excludes children of Palestinian fathers.
Tweet
Pope Shenouda Article