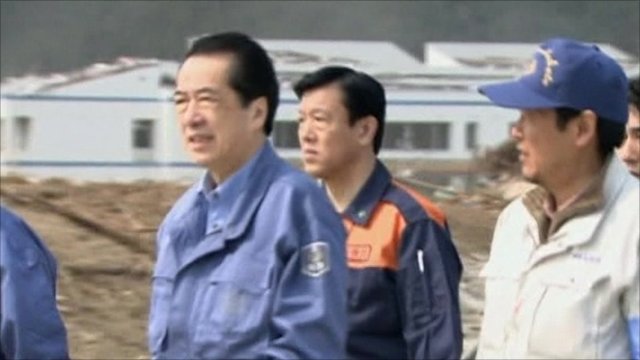 Radioactive water is leaking into the sea from a 20-centimetre (8-inch) crack in a containment pit at Japan's quake-hit Fukushima nuclear plant, its operator Tepco has said.

The crack under reactor 2 may be the source of recent radiation in coastal waters, Tepco officials said.
Tepco is preparing to pour concrete into the pit to try to stop the leak.
Japanese PM Naoto Kan has been visiting the area of north-eastern Japan worst affected by last month's tsunami.
Hidehiko Nishiyama, deputy director-general of the Nuclear and Industrial Safety Agency, told a news conference Tepco was planning to pour concrete into the pit to seal the crack.
"With radiation levels rising in the seawater near the plant, we have been trying to confirm the reason why, and in that context, this could be one source," Mr Nishiyama said.
"There could be other similar cracks in the area, and we must find them as quickly as possible."
Tepco (Tokyo Electric Power Co) had earlier said it suspected radioactive material was escaping continuously from the plant, but they had not until now found the leak.
Measurements showed the air above the radioactive water in the pit contained 1,000 millisieverts of radioactivity.
Finding the source of the leak is a positive development, the BBC's Rachel Harvey in Tokyo says.
The challenge now though is to seal the opening, check there are no more elsewhere and remove the contaminated liquid, she adds.
On Friday, US Energy Secretary Steven Chu said about 70% of one reactor core was severely damaged as was about 30% of another. He said those figures were estimates because high radiation levels prevented workers from getting a close look at the damaged units.
Officials at Tepco and the nuclear safety agency would not confirm that assessment, AP said.
Kan visit
Saturday's visit was Mr Kan's first ground visit to the disaster zone, although he had flown over tsunami-hit areas the day after the earthquake.
Mr Kan assured people affected by the disaster in Rikuzentakata that the Japanese government would do all it could to help them.
"I spoke with local officials how to rebuild fishing industry, including how we can rebuild farms for fish and shellfish. The Japanese government will do its best to support their efforts," he said.
Mr Kan visited an evacuee shelter and then told reporters: "A person who had a house along the coastline asked 'Where could I build a house in the future? I said the government will do its best to support you until the end."
But a 60-year-old refugee, Ryoko Otsubo, said the visit was ill-timed.
"The timing of his visit is too late. I wish he had visited this place earlier. I wanted him to see the piles of debris where there were no roads through - now the roads are cleaned."
Mr Kan, who flew into Rikuzentakata on a military helicopter from Tokyo, also visited the base camp for workers trying to stabilise the plant, just inside the 20-km exclusion zone around the plant.
Mr Kan had flown over the nuclear plant on 12 March, the day after the quake.
Bodies' search
A massive search began on Friday to find the remains of those missing since the devastating tsunami hit.
More than 11,500 people are confirmed dead, but nearly 16,500 remain unaccounted for.
Three weeks after the 9.0-magnitude earthquake and subsequent tsunami, the true number of those who died is still not known.
More than 100 Japanese and US military planes and 65 ships along with 24,000 military personnel are scouring the country's north-eastern coast to locate any remaining bodies for three days.
Many coastal areas remain inaccessible to rescuers trying enter by road or foot, blocked by the mangled remains of houses, ships, cars and trains.
Because of radiation concerns, the search does not include the 20km (12-mile) evacuation zone around the Fukushima Daiichi plant, where there are believed to be 1,000 bodies.
Tweet
Pope Shenouda Article