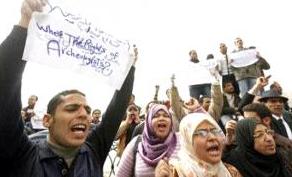 CAIRO - There are growing fears that the workers' strikes, launched in the wake of the recent revolution, have badly affected the national economy.

Despite appeals from the caretaker Government of Prime Minister Essam Sharaf and the Supreme Council of the Armed Forces, the striking workers are stubbornly refusing to disperse and go back to work.

A proposed bill that would criminalise strikes is meeting fierce resistance from the strikers, who claim that the bill, which will introduce LE500,000 fines and prison sentences, is a sly manoeuvre to defuse the revolution and deny the nation one of its goals.

Over the past two months, strikes have been erupting in different places, including major banks and big companies.

Angry employees are calling for higher wages and the removal of corrupt officials and managers. The strikes are often violent, adding to the lack of security and safety in the country.

Sharaf is being blamed for the chaos, which, economists warn, is wreaking havoc on the economy. The Prime Minister, who visited the youngsters in Al Tahrir Square hours after his appointment, is accused of being too lenient. People want him to deal more firmly with lawbreakers and violent protesters.

A professor of constitutional law, however, suggests that the state of instability has been deliberately planned by security men, who want a pay rise.

Prof. Tharwat Badawi also accuses the security men and their generals of putting their interests before the public's safety.

He told the press that a number of powerful police generals, faithful to Mubarak's toppled regime, are behind chaos, as they want to undermine the Government's credibility.

The professor appears to be confident that the creation of a new constitution will pave the way for new laws that will help stabilise the country.

Instead of urging angry employees to disperse and go back to work, Badawi said that the revolution should continue until the relics of the toppled regime are evicted from decision-making circles.

One former police general sees things differently. Gen. Safir Nour, the ex-Assistant of the Minister of Interior, argues that the presence of the police in the street will only have an effect when citizens collaborate with them.

Gen. Nour, who is the chief of the National Committee of Defence and National Security in the shadow government of the opposition Al-Wafd Party, confirms that the Army could play a significant role in laying strong foundations for security and stability.

He accepts that the prestige of the State has been badly shaken, because post-revolution governments have failed to calm down restive works or to use a sledgehammer to deal with thugs, criminals and saboteurs.

Meanwhile, the former head of the Council of Sate regrets that the revolution has given rise to disturbances and vandalism across the country, especially after the riot police and security authorities clashed violently with demonstrators calling for justice, freedom and liberty.

Chief Justice Mohamed Hamed el-Gamal is optimistic, however, that things will improve.