The veiled face of Maspero 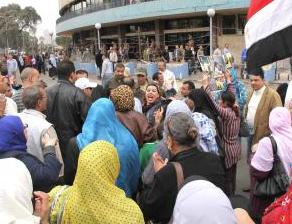 CAIRO - The street is now a little quieter outside the Radio and TV Building in Maspero near the Nile, after more than a month of protests, ending in those by Coptic Christians and later by angry media people.
Some of the protesters’ demands have been met, while, inside the building, radio and television employees still have their own problems.
It seems that the changes that have been taking place in many governmental institutions are going to reach as far as those anchors and presenters who wear headscarves.
Recently, headscarf-wearing TV presenters demanded they be allowed to return to Maspero, a demand that has been met with the approval of both Sami el-Sherif, the head of the Egyptian Radio and Television Union (ERTU), and Nadia Halim, the Chairwoman of Egyptian Television.
Due to the financial crisis hitting all sectors in the country and the lack of a budget to produce new programmes appropriate for headscarf-wearing presenters, TV officials have decided to distribute them among the social programmes that are currently being broadcast.
However, this has angered many presenters who don’t wear headscarves, as Mona el-Wakil, a headscarf-wearing TV presenter who has been given the opportunity to present the Yes’ed Sabahak (Happy Morning) programme, says.
“We have recently suffered a lot, being prevented from working while wearing the hijab [headscarf]. And, when it was officially announced that we could come back, we were surprised by the opposition from our non-headscarf-wearing colleagues,” she says.
Mona adds that these opponents claim that their appearing in the company of headscarf-wearing presenters “wouldn’t be good”, despite that fact that this happens on many satellite channels.
“The audiences don’t care about what the presenter is wearing; all they really care about is that we do our job with objectivity,” she argues.
The issue of Islamic dress code has long been a controversial one in Egypt and now the conflict is taking place against a quietly changing social landscape in Egypt, with more and more professional women deciding to don the headscarf.
Consequently, the head of Egyptian Television decided to allow the headscarf-wearing presenters to present programmes on only two days a week.
But their non-headscarf-wearing colleagues rejected this, claiming that the return of their headscarf-wearing colleagues will affect their payments and salaries.
There was a similar crisis and similar complaints when women in headscarves appeared in a programme called Zeina.
“I thought everything would change after the revolution. Besides, I don’t think that their salaries will be affected as Maspero was hiring external presenters, whose contracts have been annulled since the revolution,” says Niveen el-Gendi, a headscarf-wearing TV presenter, adding that they have the right to replace these outsiders.
“We suffered before the revolution under the old regime, but now we are suffering even more, simply for wearing the hijab,” she adds, denying that their non-headscarf-wearing colleagues were forced to complain against them. “What a mess! We are fighting with each other.”
Niveen, like her other headscarf-wearing colleagues, refuses to wait until the TV produce new TV programmes – whether religious or social programmes – suitable for them.
“Such programmes demand huge budgets, while Maspero is already suffering from a financial crisis. We’ve been through enough. All we want is to temporarily work on the TV programmes being currently screened until things begin to return to normal at Maspero,” Niveen told the Arabic-language independent newspaper Al-Masri Al-Youm.
Despite obtaining several court rulings in their favour, headscarf-wearing presenters are still unable to appear on TV on the grounds that they are religious symbols.
“A headscarf-wearing presenter’s place is at home not on TV,” according to former Information Minister Anas al-Fiqi. “The audience does not want to get information from a religious symbol.”
The first headscarf-wearing TV presenter was Kariman Hamza, who decided in the early 1970s to wear the hijab at work. She was only allowed to host a religious show that lasted for a few minutes.
While many such presenters have filed lawsuits demanding they be allowed to appear on TV after being asked to leave or work off screen, several others have chosen to resign due to the implicit rule that headscarf-wearing presenters are not welcome.
The rulings issued by the Higher Administrative Court have only started coming into effect after the January 25 revolution, which also ousted the Information Minister.
Meanwhile, Nadia Halim, the Chairwoman of Egyptian Television, has told the press that all headscarf-wearing presenters are welcome back, whether in existing programmes or new ones.
“The officials in Maspero have nothing to do with this problem. They have already got rid of some external presenters and we need new faces.
“I think we should be more tolerant and accept each other, as we all work in a State-owned authority. No-one has the right to oppose his colleagues or their return, especially during the current instability,” she stresses.
Tweet
Pope Shenouda Article